Taurasi eyeing another record as Mercury travel to Chicago 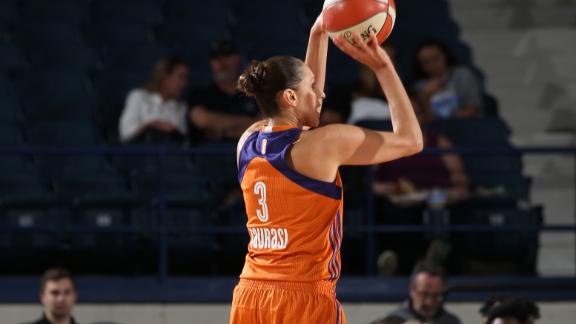 ROSEMONT, Ill. -- Diana Taurasi is closing in on yet another WNBA record as her Phoenix Mercury take on the Chicago Sky on Thursday at Allstate Arena.

Taurasi, a 13-year league veteran, needs just one made 3-pointer to pass Katie Smith as the WNBA's all-time leader. She currently shares the top spot with Smith with 906.

"I always talk about Katie (Smith) being one of my biggest heroes growing up, watching basketball, her work ethic," Taurasi told reporters after last Saturday's 107-65 victory over Dallas. "I got to share the court with her at the Olympics. To be tied with her right now is kind of cool. If we could just say end it there and we both be on top we would both be pretty happy with that."

The Mercury (3-2) have won three of their last four entering the season's first meeting with Chicago. The Sky (1-5) are stuck at the bottom of the WNBA Eastern Conference and struggling through a three -game losing streak.

Taurasi, who has 7,362 career points, also needs just 19 to pass Tamika Catching for second all-time in league scoring and is just 127 from taking the top spot held by Tina Thompson.

Taurasi, 34, has played on three WNBA championship teams and owns four Olympic gold medals. She is the first player in league history with 7,000 career points, 1,500 career assists and 1,500 career rebounds.

She currently is second in Phoenix scoring, averaging 12.8 points per game. Brittney Griner leads with 20.2 points and 7.4 rebounds per game.

Chicago continues to try to find its footing under Amber Stock, its new coach and general manager. She said Sky players remain engaged despite a frustrating start.

"All 12 ladies are extremely competitive," Stock said. "When you are playing any professional sport, the competitiveness is all channeled into focus and drive. ... When you get into this type of predicament, you channel that energy into focus, drive and application on doing the things and making the adjustments that need to be made."

Their lone win was a 75-71 decision on May 21 at Atlanta, and they then suffered back-to-back losses to Washington and a 97-79 setback to previously winless Connecticut last Sunday.

Forward Tamera Young leads the Sky with a 15.2 points-per-game average, good for 14th in the league.

Guard Cappie Pondexter is 14th in WNBA scoring with a 14.7 point-per-game average. She is 15th all-time in the WNBA for career minutes with at 11,665 minutes and counting.

Chicago recently had reinforcements arrive in guards Allie Quigley and Courtney Vandersloot, who returned earlier this month from European play.

Phoenix continues a three-game road trip on Sunday at the New York Liberty and a June 7 game at Indiana. Next up for Chicago are road games at Los Angeles (June 6) and San Antonio (June 10).