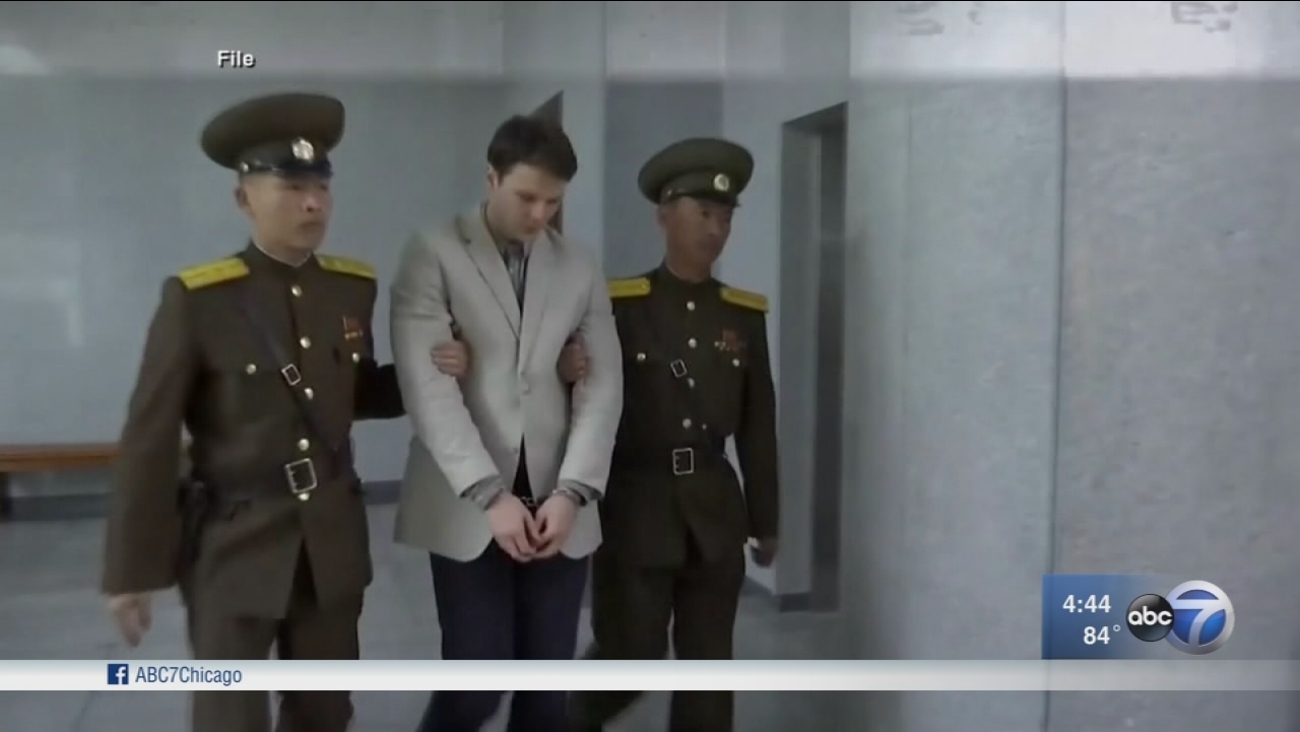 American college student Otto Warmbier has been released after more than 17 months in detention in North Korea but has been in a coma for over a year, his parents said. (WLS)

AP
WYOMING, Ohio -- An American college student who was imprisoned in North Korea and returned to his home state of Ohio in a coma suffered a "severe neurological injury," a hospital spokeswoman said Thursday.

Otto Warmbier is in stable condition at the University of Cincinnati Medical Center with his mother by his side, hospital spokeswoman Kelly Martin said. Doctors planned an update later Thursday.

His father, Fred Warmbier, said he does not believe North Korea's explanation that the coma resulted from botulism and a sleeping pill. He said there was no reason for North Korea to keep his 22-year-old son's condition a secret and deny him top medical care.

"Relief that Otto is now home in the arms of those who love him and anger that he was so brutally treated for so long," he said at a news conference at Wyoming High School, where Warmbier graduated in 2013 as class salutatorian and played soccer. Blue-and-white ribbons in the school's colors were tied around the trees and utility poles all the way along the city's main road in a show of support.

To honor his son, Fred Warmbier wore the same jacket Otto wore when North Korea presented him before the media on Feb. 29, 2016, at an event where he tearfully confessed that he tried to steal a propaganda banner while visiting the country. He was last seen publicly that March, when he was sentenced for subversion to 15 years in prison with hard labor.

Fred Warmbier said that he doesn't know why North Korea released his son but that the country doesn't do anything out of "the kindness of their hearts." He called on the country to release three other Americans currently held there.

"There's no excuse for the way the North Koreans treated our son," he said.

Warmbier also accused North Korea of luring Americans to the country with a Chinese tour company making the false promise they will never be detained.

He said he received "a very nice phone call" Wednesday evening from President Donald Trump, who said Secretary of State Rex Tillerson worked hard to bring Otto home and asked how the family was doing. Warmbier said the family was "extremely grateful for their efforts and concern."

He said he and his wife grew frustrated with the lack of word about their son from former President Barack Obama's administration, which they said instructed them to keep a low profile to avoid upsetting the North Koreans.

Asked whether he thought the previous administration could have done more, Warmbier replied: "I think the results speak for themselves."

Fred Warmbier told Fox News' Tucker Carlson on Wednesday that Otto was "terrorized and brutalized" during his 17-month detention and has been in a coma for more than a year.

"The day after he was sentenced, he went into a coma," the father said in an interview scheduled to air Thursday night. He said he and his wife, Cindy, only learned of their son's condition last week.

Residents of the northern Cincinnati suburb tied blue-and-white ribbons, the school colors, to trees near the family's home. Joy at his release was mixed with concern over his condition.

In its first official comment since Warmbier was returned home, North Korea said it released him for humanitarian reasons. The state-run Korean Central News Agency on Thursday did not comment on his medical condition.

Bill Richardson, a former U.S. ambassador to the United Nations, called for an investigation into what happened to Warmbier.

Richardson, a Democrat, credited the State Department with securing Warmbier's return from North Korea without any preconditions but said a forceful response from the U.S. government would be required "if it's determined that there was a cover-up and Otto's condition was not disclosed and he didn't get proper treatment."

Such detentions in the totalitarian nation have added to tensions between Washington and Pyongyang.

Tillerson said Tuesday that the State Department was continuing "to have discussions" with North Korea about the release of the other imprisoned Americans.
Report a correction or typo
Related topics:
virginiaohiou.s. & worldcollege studentnorth koreaprison
Copyright © 2020 by The Associated Press. All Rights Reserved.
RELATED 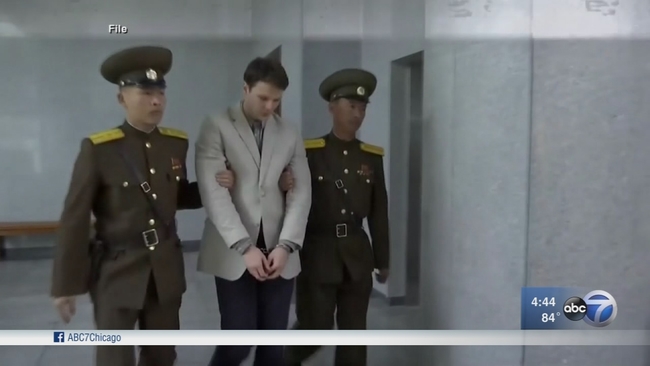