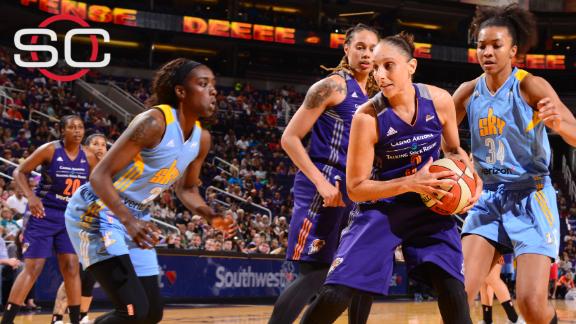 PHOENIX -- Brittney Griner scored 27 points and Diana Taurasi had 15 to move closer to the WNBA scoring record after the Phoenix Mercury beat the Chicago Sky 86-78 on Friday night.

Heading into Sunday's game in Los Angeles, Taurasi is 14 shy of passing the 7,488 points set by Tina Thompson from 1997-2013. Phoenix's star was just 2 of 10 from the field and had nine points, all in the first half, until making six free throws in the final minute.

Jessica Breland's 3-pointer pulled Chicago within 80-75 with just under a minute to play. On the ensuing possession, Cappie Pondexter fouled Taurasi on a shot and then was ejected after picking up two technical fouls. Taurasi made four free throws and, after Kahleah Copper's three-point play with 32 seconds left, added two more to close out the scoring.

This story has been corrected to show the Mercury made 12 of 21 free throws in the second quarter.