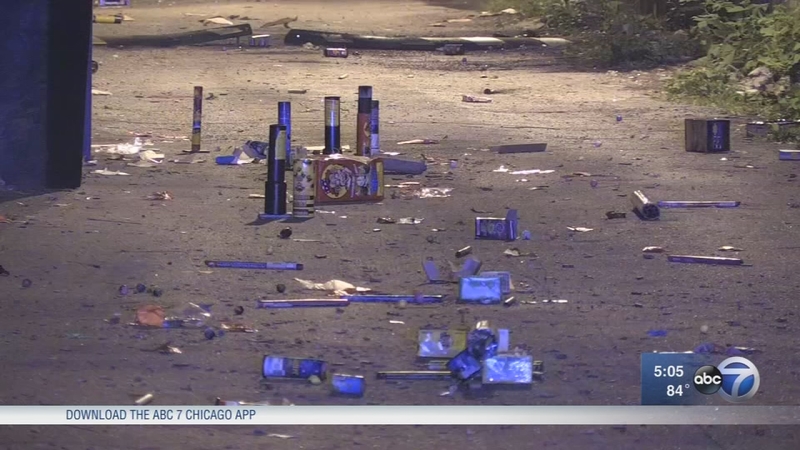 CHICAGO (WLS) -- A father was killed in front of his children on the Fourth of July in a tragic fireworks accident on Chicago's Southwest Side.

Around 9:30 p.m. Tuesday, 42-year-old David Griffin was lighting fireworks in an alley in the 2500-block of West 54th Street in the city's Gage Park neighborhood. His wife said he was with his young children at the time.

When he went to check on a firework that didn't seem to be firing, it blew up in his face as it shot into the air, police and fire officials said.

"The fuse went off and it seemed like everything was going, and then the fuse sort of died, and he stuck his head over it and it went off," said Daniel Saenz, witness.

Griffin suffered serious injuries to his head and was transported to Holy Cross Hospital. He died about 20 minutes after the accident. No one else was hurt.

His wife and other relatives returned to the home Wednesday morning, overcome with emotion.

Fernando Sotelo, Griffin's upstairs neighbor and family friend, said he worked as a security guard and will be remembered as a good father who was always looking out for others.

"It's dangerous around here. When there would be drive-bys, he'd come out and protect us. He was protective over this neighborhood," Sotelo said.

Two other men were badly hurt in separate accidents involving fireworks over the holiday weekend. A man in his 30's suffered a critical injury in the 4300-block of West Cortez Street. The injury was specific to his hand, but bad enough to be considered critical.

A man in his 40's also badly injured his hand Tuesday when a firework blew up as he was handling it in the 4600-block of West Belmont Avenue.
Report a correction or typo
Related topics:
chicagogage parkman killedfireworks
Copyright © 2021 WLS-TV. All Rights Reserved.
More Videos
From CNN Newsource affiliates
TOP STORIES