Olympic boycott is a missed opportunity to showcase young U.S. stars such as Auston Matthews 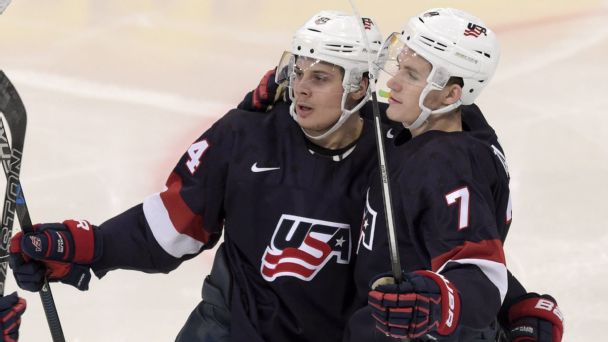 In September, the Los Angeles Kings and Vancouver Canucks will each travel 6,000-plus miles across the Pacific to play two preseason games. The exhibitions in Beijing and Shanghai -- the NHL's first venture into China -- signal that the league might emulate a strategy the NBA initiated more than a decade ago. Growth opportunities in Asia, as the NBA has learned, are significant.

That's why it's perplexing -- and, to many, disappointing -- that the NHL is skipping the 2018 Winter Olympics in PyeongChang, South Korea.

But the NHL isn't just whiffing on a chance to expand its global footprint. The Olympic boycott is a momentum killer when it comes to promoting the league's young talent, especially in the United States.

"In the Olympics, the eyes of the world are on you, and it puts the NHL on the forefront," Hockey Hall of Famer Mike Modano told ESPN.com. "People get to see the best of the NHL players. To get all these stars together for a congested two-week period? It's an incredible way to market the game."

Right now is an incredible time for hockey in the United States -- but the Americans won't get to show off.

USA Hockey officials note swelling participation across all levels of the sport, including a record 115,694 8-and-under players in 2016-17, a 27 percent increase since 2006-07. The NHL, meanwhile, is on the cusp of a renaissance of American talent. The U.S. hasn't won an Olympic gold since 1980 -- medaling just twice in the nine Games since -- but not since the era of Brett Hull, Pat LaFontaine, Brian Leetch, Modano, Jeremy Roenick,Keith Tkachukand Doug Weight has there been a more exciting crop of ascending stars.

"The talent level now, it really reminds me of our group the mid to late '90s," said Modano, who won gold at the 1996 World Cup of Hockey and silver at the 2002 Olympics with Team USA. "About 10 to 12 guys, all the same age, coming up together. We competed really hard against each other in the NHL but put our egos aside and loved getting the chance to play with each other to represent our country. It would be unfortunate for these guys to miss out on the Olympics, because I'd like to see what they're capable of doing."

Auston Matthews posted the most prolific rookie season (40 goals, 69 assists in 2016-17) for an American-born rookie, let alone in the 100-year history of the Toronto Maple Leafs-- and he's only 19. The Detroit Red Wings' Dylan Larkin (who turned 21 last month) and the Buffalo Sabres' Jack Eichel (20) are young, soon-to-be elite centers, while Johnny Gaudreau (23) led the Calgary Flames with 61 points last season and teammate Matthew Tkachuk (19) -- eldest son of Keith -- wasn't far behind, with 48. The Columbus Blue Jackets boast two stud defensemen in Seth Jones (22) and Zach Werenski (20). Oh, and Chicago Blackhawkswinger and three-time Stanley Cup championPatrick Kane, the only American to win the Hart Trophy, is only 28.

"It is our responsibility to help market these guys and showcase them to the next generation of players," Jim Johannson, a longtime USA Hockey executive who was named general manager of the men's Olympic team on Aug. 4, told ESPN.com. "As much as we want to take credit for their success, there was a volunteer coach or a youth program who helped get them started. And the guys have done a great job in giving back to their communities and youth hockey."

Or, as USA Hockey president Jim Smith puts it: "Look, I think every youth hockey player in this country knows who Auston Matthews is."

Fair point, but the Olympics can serve as an introduction to casual fans -- and even non-fans who tune in simply for the spectacle. Consider T.J. Oshie, the darling of the Sochi Games in 2014. The then-St. Louis Bluesforward and Olympic fourth-liner converted 4 of 6 penalty shots in an overtime win against host Russia -- which literally created his Q-rating. It also vaulted Oshie into a dizzying circuit -- he gota shout-out from President Barack Obama, made multiple appearances on morning shows, even starred in a national ad campaign for Enterprise, and then finished the NHL season in the top 20 for NHL jersey sales for the first time in his six-year career. The list was released that April, less than two months after Sochi, so imagine how many Oshie jerseys were sold during that span.

Olympic hockey has a built in-audience, and it has been trending up. The 2010 Olympic gold-medal game between the U.S. and Canada was the highest-rated hockey game -- of any kind -- since the 1980 Miracle on Ice. The Oshie extravaganza in 2014 (a 3-2 U.S. win over Russia) set records as the most-watched hockey game for NBC Sports Network. That game, by the way, occurred not in the medal rounds, but during pool play -- and featured a 7:30 a.m. ET Saturday puck drop.

As the league tries to lure the casual fan, it doesn't help that Eichel's Sabres are mired in a six-year playoff drought, Larkin's Red Wings are rebuilding, and Gaudreau, Matthews and Tkachuck are employed north of the border. Even though Matthews' Maple Leafs are contenders, Toronto will be featured on NBC's prime-time schedule just three times next season; the Flyers, who finished 11th in the Eastern Conference in 2016-17, have 16 prime-time dates.

"Anytime we can have NHL players play for us, we're happy, but we understand there's other factors at play and we have to accept that," Smith told ESPN.com. "But when you hear people say this diminishes the Olympics -- I mean, it's the Olympics. It comes every four years. It doesn't matter who is playing, it will be enjoyable to watch."

USA Hockey is hamstrung. When asked about the NHL's participation policy, USA Hockey officials repeatedly deferred to "respecting the league's decision." The two entities have a strong relationship; for example, the NHL's "Hockey is for Everyone" initiative is oft-credited with helping raise youth-participation numbers.

"It was hugely important to remain aligned with [the NHL]," Johannson says. "They're great partners in so many programs. The Olympics is just one part of the equation. Ultimately, it's something the NHL and NHLPA are going to have to work out, but it's a shared agreement upon them. I'm not trying to stay out of it, but to a degree I am -- because that's their business."