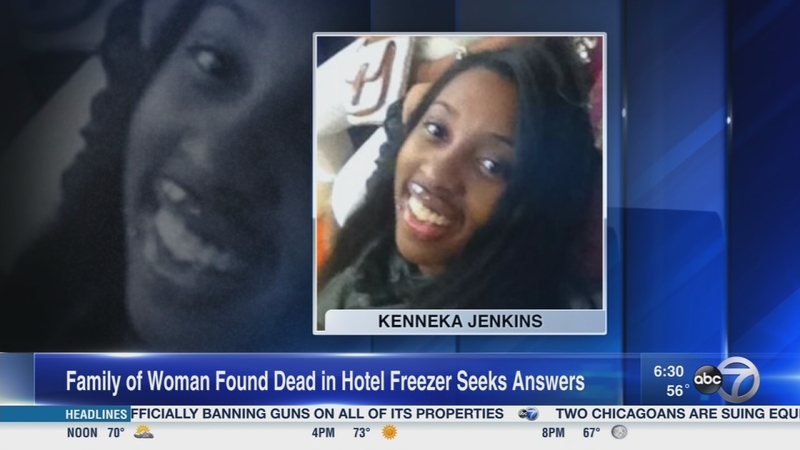 ROSEMONT, Ill. (WLS) -- The family of a young woman found dead inside a hotel in northwest suburban Rosemont hopes to have answers as soon as Wednesday. They believe something just doesn't add up, as police try to explain how the woman wound up in a freezer.

The mayor of Rosemont is facing tough questions about the death of a Chicago woman whose body was found in the freezer of a hotel.

Police are looking at surveillance video from the Crowne Plaza Hotel, which shows Kenneka Jenkin's last moves. The 19-year-old left her home in Chicago around 11:30 p.m. Friday to attend a birthday party on the ninth floor of the hotel. She was last seen at the party early Saturday morning. Her sister said she received a text message from Jenkins around 1:30 a.m.

Jenkins' mother, Tereasa Martin, said she received a call around 4:30 a.m. Saturday from friends who said they couldn't find her daughter after the party. Martin said she immediately went to the hotel and asked them to check surveillance footage to see if they could locate her daughter.

After the hotel referred her to police, Martin said she called 911, and dispatchers told her to wait a few more hours because Jenkins could be out with friends.

"I know for a fact that she would have survived if they would have gotten on it sooner," Martin said.

Martin and her older daughter, Leonore Harris, went door to door at the hotel looking for Jenkins. The hotel called police on them for disturbing the peace.

Rosemont police said after the report was filed, the hotel "actively canvassed and searched the immediate area." Employees found her body just before 12:25 a.m. Sunday in a basement freezer. Police said her body was beyond resuscitation. Jenkins was pronounced dead at the scene.

An autopsy was conducted Sunday, the Cook County Medical Examiner's Office said. The cause and manner of death have not been determined. They are pending further studies, which the medical examiner's office said can take several weeks.

Police do not suspect foul play at this point. Jenkins' friends said they had all been drinking and using drugs in one of the hotel rooms, police said.

"It takes strength to open these doors, the freezer doors. So, if she couldn't hardly hold herself up. ... How did she find the strength to unlock both the double doors?" Martin said.

In part of a hotel surveillance video, Jenkins can be seen stumbling down a hotel hallway. Police have not released that video.

Martin said she wasn't satisfied with their version of events, because of safety features that make it possible to open coolers from the inside.

"I believe someone in this hotel killed my child," Martin said.