WLS
One conspiracy theorist has concluded that the world will end this Saturday, Sept. 23. But this is hardly the first time an ''apocalypse'' has been upon us.

Though many, many predictions have been made, here's a look at some of the more famous theories for modern apocalypses.

This 16th century "seer" was known for vague predictions that many believe to have come true. One of his writings was cause for concern as the last century drew to a close:

"When 1999 is seven months o'er, shall heaven's great ruler, anxious to appease, stir up the Mongol-Lombard king once more. And war reign haply where it once did cease."

When the world didn't end, his believers turned their attention to a new date: 3797, the last year he wrote about. Some believe this is when Nostradamus believed the world would end, while others say it's simply where his works stopped.

"Y2K" refers to the widespread panic that computers would glitch because dates had not previously included "19" as part of the year. What started as a fear that computer-based systems would malfunction escalated as the new year drew closer. Books were written about ways to survive "Y2K," as anxiety built that something would happen. Some religious leaders predicted that the rapture would come with the new millennium. Rev. Jerry Falwell said the event would be, "God's instrument to shake this nation, to humble this nation."

The Christian radio personality, who had an estimated "global following probably in the millions," predicted the world would end in 2011. He wrote that the world would end on May 21 and then again on October 21 of that year. When it didn't happen, he apologized for his "sinful" actions. Camping died in 2013 at the age of 92.

The Mayans (but not really)
Years predicted: 2012

Perhaps the most hyped-up recent prediction, one that even inspired the aptly named movie 2012, was that the world would end on December 21, 2012. Theorists predicted everything from an impending asteroid collision to the arrival of the imaginary planet "Nibiru" to an overheating of the sun.

The widespread speculation prompted NASA to release an explanation, saying the date had been blown out of proportion due to a misunderstanding of the Mayan calendar.

Meade, who studies numbers in the Bible, predicted the beginning of the end on Sept. 23, 2017 after an encounter with the planet Nibiru because it is 33 days after the total solar eclipse in the United States.

"Jesus lived for 33 years. The name Elohim, which is the name of God to the Jews, was mentioned 33 times [in the Bible]," he said.

Meade's prediction was denounced by Christianity Today, who published an article saying that Meade's assertion was "making Christians look silly."

Sir Isaac Newton's belief that Christ would return in 2060 and the world as we know it would end was based on his study of the Bible and of prophecies, according to Newton scholar Stephen D. Snobelen. The writings were "were private musings made on a scrap of paper not meant for the public" but nonetheless predictions he really made.

"The story about Newton predicting the Apocalypse in 2060 is the sort of thing that one would expect to see on the covers of the tabloids. In this case, however, the story is true," he wrote in 2003 after the prediction went viral.
Report a correction or typo
Related topics:
bizarresolar eclipsetrendingviral
Copyright © 2020 WLS-TV. All Rights Reserved.
RELATED 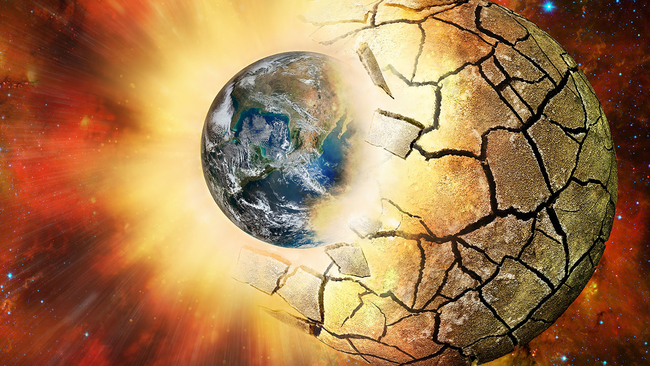