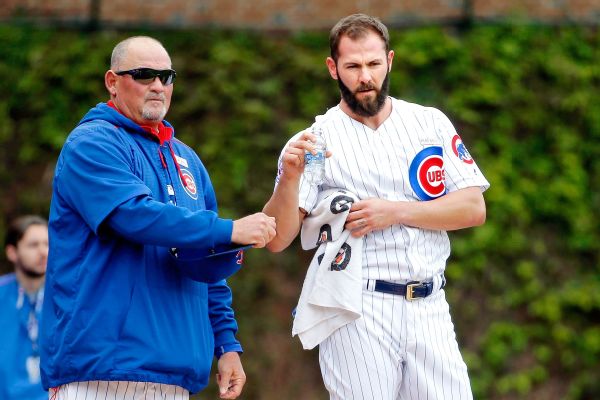 ESPN
The Chicago Cubs will not exercise their option to retain pitching coach Chris Bosio for 2018, a source confirmed to ESPN on Saturday.

Bosio had been with the Cubs since 2012, joining the franchise when Theo Epstein became team president. USA Today Sports first reported Bosio's dismissal.

"Of course," Maddon said Wednesday, before the Cubs were eliminated by the Dodgers in the National League Championship Series. "Listen, the staff's done a great job. Our staff's been awesome. It's a tightly knit group. Really, there's a lot of synergy involved."

A former major league pitcher, Bosio previously served on the coaching staffs of the Tampa Bay Rays and Milwaukee Brewers.

A year after rallying to beat Cleveland for their first World Series title since 1908, the Cubs used a second-half push to win their second straight NL Central title. They then advanced to the NLCS for the third consecutive season, but fell to Los Angeles in five games.

The Cubs hit only .156 and averaged 1.6 runs per game in the NLCS against the Dodgers, and the pitching staff issued 53 walks in 10 postseason games.

There are some issues looming for the Cubs heading into the offseason. Arrieta, All-Star closer Wade Davisand veteranJohn Lackeyall have expiring contracts.

Mike Montgomery would seem to be an in-house candidate to fill a rotation spot, though Epstein said he will probably remain a reliever and spot starter. Montgomery made 14 starts and 44 appearances, finishing with a 7-8 record and 3.38 ERA.

The Cubs also could again be in the market for a closer, after Aroldis Chapman went back to the Yankees last offseason.Davis converted 32 of 33 saves after a trade from Kansas City last winter, but the three-time All-Star was shaky this postseason with a 4.26 ERA.

Epstein insisted after the Cubs' NLCS loss that he has not lost faith in Carl Edwards Jr. and Montgomery despite their playoff struggles out of the bullpen. Edwards -- like Montgomery -- pitched well during the regular season.

"Those two guys who have been the ones struggling this postseason, they got the three biggest outs in Cubs history last year," Epstein said, referring to the 10th inning of Game 7 at Cleveland. "They both had really good years, and they both finished strong."