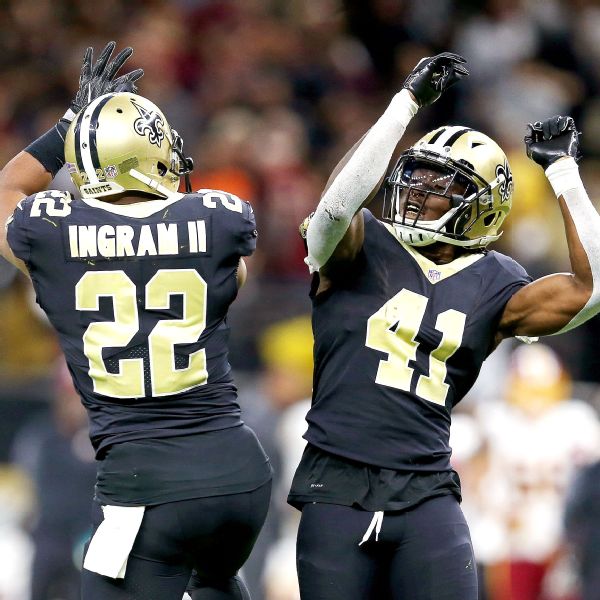 The New Orleans Saints are sending both Mark Ingram and Alvin Kamara to the Pro Bowl -- the first time in 42 years a team has sent two running backs to the Pro Bowl in the same year, according to research by ESPN Stats and Information and the Elias Sports Bureau.

But as Ingram likes to say, he and Kamara are "in the business of making history." They are also on pace to become the first running back duo in NFL history to both surpass 1,500 yards from scrimmage in the same season.

In the NFC, the New Orleans Saints and Philadelphia Eagles tied for tops in the conference with six picks apiece, led by quarterbacks Carson Wentz and Drew Brees. Wentz tore his ACL in a Week 14 win over the Rams and had surgery on Wednesday to repair the damage.

Roethlisberger is joined at quarterback in the AFC by the Patriots' Tom Brady, named to his 13th Pro Bowl, including nine straight.

Of the 86 selections on Tuesday, 24 are newcomers. Saints cornerback Marshon Lattimore and running back Alvin Kamara, Arizona Cardinals special teamer Budda Baker and Kansas City Chiefs running back Kareem Hunt were the only rookies selected for the game.

Rob Gronkowski, Matthew Slater and James Develin are the Patriots' four Pro Bowlers, according to a source. It's the seventh consecutive Pro Bowl for Slater, the fifth Pro Bowl for Gronkowski, and first for Develin.

Five teams were shut out of the Pro Bowl this year: the New York Jets, the Cleveland Browns, the Indianapolis Colts, the Chicago Bears and the Green Bay Packers.

The Saints (10-4) sent a total of six players to the Pro Bowl after being shut out in the initial selections in both 2015 and 2016. Quarterback Drew Brees earned his 11th selection. Defensive end Cameron Jordan earned his third. And rookie cornerback Marshon Lattimore and second-year receiver Michael Thomas each earned their first selection.

But it's the dynamic duo of Ingram and Kamara that has generated the most buzz during the Saints' surprising surge as they have fueled the NFL's No. 1-ranked offense.

Kamara, a third-round draft choice from Tennessee, is already the third rookie in NFL history with more than 600 rushing and receiving yards (652 and 684, to be exact), with a total of 12 touchdowns.

Ingram, who turns 28 Thursday, has already set career highs with 1,045 rushing yards and 11 rushing touchdowns. He also has 51 receptions for 375 yards.

It's hard to decipher exactly when the last pair of true running backs made the Pro Bowl together, since many top running backs like Jim Brown, Larry Csonka and Franco Harris were listed as fullbacks. ESPN and Elias used rushing attempts as the standard for their research.

The last pair of teammates to make the Pro Bowl with 100-plus rushing attempts was the Tampa Bay Buccaneers' Warrick Dunn and Mike Alstott in 1997 and 2000 -- but Alstott was selected as a fullback both times.

Before that, it was the St. Louis Cardinals' Jim Otis and Terry Metcalf in 1975. Otis was listed as a fullback then, too, but he had 269 carries for 1,076 yards. The Miami Dolphins' legendary duo of Csonka and Mercury Morris made the Pro Bowl together as running backs in 1972 and 1973, among others in that era.

The game is January 28 in Orlando, Florida.