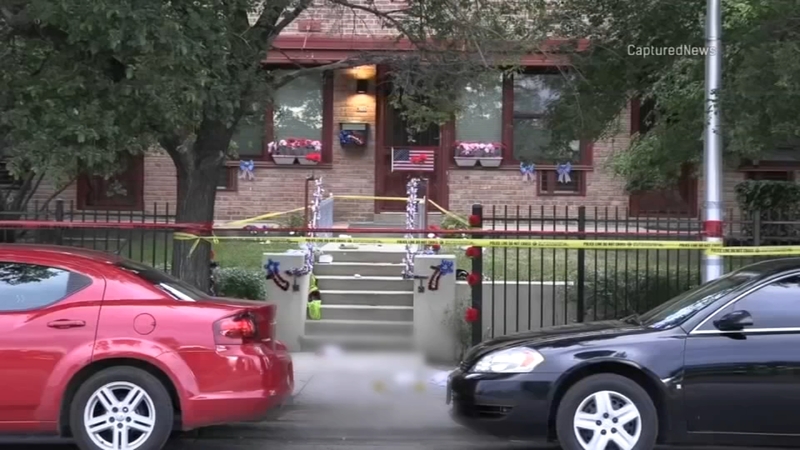 CHICAGO (WLS) -- One man was killed and two others wounded in a shooting in the Wentworth Gardens neighborhood on the South Side Wednesday morning, Chicago police said.

The three men were standing outside the apartments at Pershing and Wentworth - just south of Guaranteed Rate Field - when someone opened fire around 5:39 a.m. Evidence of a party remained at the scene hours later.

A 24-year-old man was shot multiple times and transported to the University of Chicago Medical Center, where he was pronounced dead. Authorities have not released his identity.

At this point there's no indication of what sparked the violence, but one neighbor says after 25 years at Wentworth Gardens, she is fed up.

"This is about the third or fourth shooting in a month or a month and a half," said Tunyona Frazier. "When does it end? Who's helping us? Ain't nobody coming over here helping us."

Frazier said she called police after hearing the gunshots, but her community needs more help.

"Nobody is coming down here in this development to talk to the residents about their safety concerns, because I live here too," she said. "I'm ready to give up. But I can't give up because I've got a kid here."

But community aid workers from the Target Development Corporation were on the scene in their orange T's Wednesday afternoon to talk about what it will take to break Chicago's circle of violence.

"We have to re-instill hope in communities that are feeling hopeless because of the number of shootings," said Rev. Autry Phillips, Target Development Corporation.

His agency stands to benefit from the Biden administration's efforts to showcase its anti-violence measures - and this shooting was top of mind at the White House.

"Chicago is a lot different than Minneapolis," said Chris Meagher, deputy press secretary. "We're seeing spikes of violence in many communities across the country, but each community has a different approach to taking on that violence and we want to really leave it in your hands."

Detectives have requested to see Chicago Housing Authority video. Cameras are on many buildings in the area, but they have not yet reviewed it.