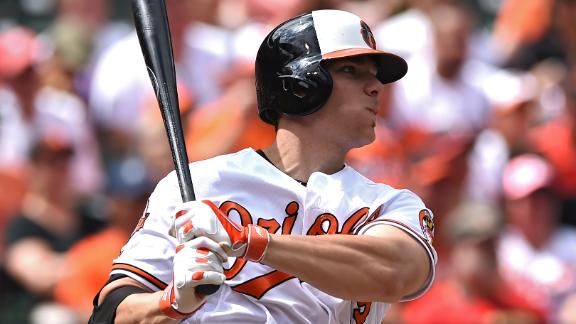 ESPN
By Jerry Crasnick
Chris Davis of the Baltimore Orioles has been suspended 25 games without pay after testing positive for amphetamines in violation of Major League Baseball's drug program, the commissioner's office announced Friday.

Baltimore started play Friday leading the AL East by 10 games with 17 left in the regular season, so the team could be without the 2013 home run champion deep into the playoffs. Under the terms of the game's drug agreement, the remaining eight games on Davis' suspension would be applied to the postseason.

Davis, 28, released a statement of apology through the players' association Friday morning.

"I apologize to my teammates, coaches, the Orioles organization and especially the fans,'' he said. "I made a mistake by taking Adderall. I had permission to use it in the past, but do not have a therapeutic use exemption this year. I accept my punishment and will begin serving my suspension immediately."

The suspension is another blow to an Orioles' team that has been beset by injuries to key players. Catcher Matt Wieters is out for the season with Tommy John surgery, and third baseman Manny Machado recently underwent season-ending knee surgery.

With Machado out for the year and Davis suspended, Ryan Flaherty, Jonathan Schoop, Kelly Johnson and Jimmy Paredes are the other third-base options remaining on the Baltimore roster. Those four players are hitting .226 (37-for-164) with three homers and 20 RBIs in a combined 35 games at third base for the Orioles.

Although Davis is hitting a major league-worst .196 this season and has struck out 173 times in 127 games, he ranks second on the Orioles to Nelson Cruz with 26 homers and is third behind Cruz and Adam Jones with 72 RBIs. Davis'112 home runs since 2012 are most in the majors, better than two-time reigning AL MVP Miguel Cabrera by two.

Davis began his career with the Texas Rangers before going to Baltimore with Tommy Hunter in July 2011 in a trade for relief pitcher Koji Uehara. He broke through with 33 homers for the Orioles in 2012 and led the majors with 53 homers and 138 RBIs in 2013 while making his first career All-Star appearance.

Chris Davis Suspended 25 Games
Doug Glanville reacts to the news that Orioles 1B Chris Davis has been suspended 25 games for using amphetamines.