WLS
By Craig Wall
CHICAGO (WLS) -- Chicago's former top cop is considering a run to replace his old boss and while Garry McCarthy said he hasn't made up his mind on a run at Chicago mayor, his words seem to say otherwise.

Listening to his remarks and looking at the signs, it appears that it was a campaign rally. But Garry McCarthy did not officially say he's running to be the next mayor of Chicago Sunday.

At his first fundraiser, held on the city's Northwest Side, Garry McCarthy was talking about how crime is driving African Americans out of certain parts of the city.

"You know which Blacks we are losing, we are losing the middle class taxpayers who can afford to get out from the South and the West Side. So who is being left behind? It's the trigger pullers," McCarthy said.

"To say that we have a gang problem is one thing, the way he said it is that everybody that's black that lives on the South and West Side are trigger pullers, and that's the way I got it, and that's what it look like to me," said Ald. Roderick Sawyer, 6th Ward.

Alderman Sawyer, who represents the 6th Ward on the city's South Side, says McCarthy owes people an apology.

"That statement was callous, it was reckless and it was disrespectful to those that live in those areas of town," said Sawyer.

On the West Side at a gathering of leaders planning an education summit, they were more dismissive of McCarthy's comments.

"When you were looking to run, people can say a whole lot of things to try to galvanize votes," said Ald. Emma Mitts, 37th Ward.

Asked to clarify what he meant, McCarthy said of course there are plenty of good people on the South and West Side, adding, "It's obvious and should not have been necessary to say."

But one West Side mother says McCarthy has a point.

"To be honest, I kind of agree with him," said Tiffany King. "I've been living out west most of my life and it's always been crime, high crime and I always say when I got older I'm going to make my way to the suburbs like some of my family."
Report a correction or typo
Related topics:
politicsmayfairchicagochathamaustingarry mccarthyfundraiser
Copyright © 2020 WLS-TV. All Rights Reserved.
RELATED 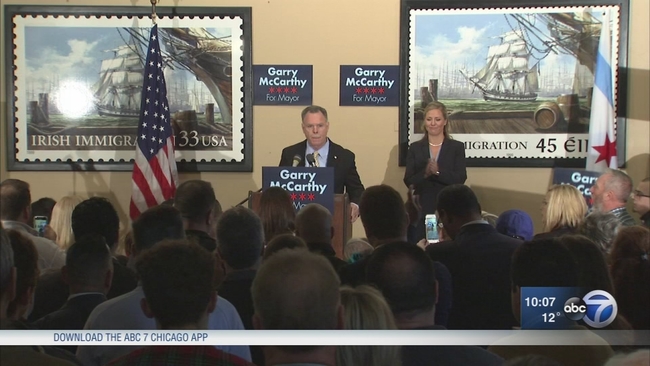