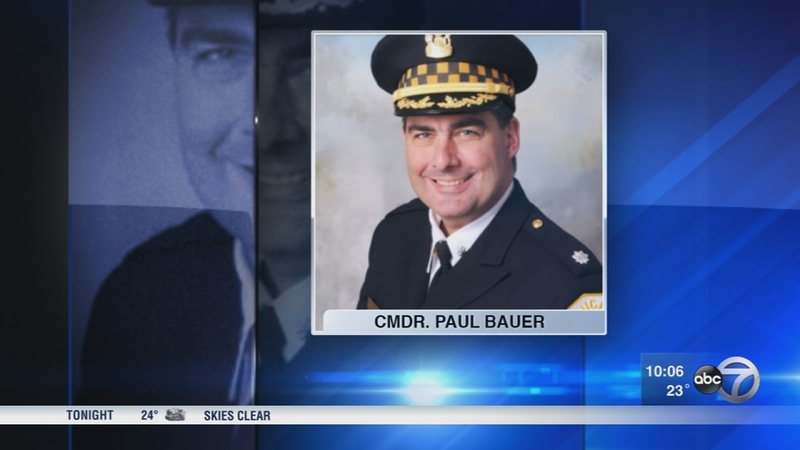 CHICAGO (WLS) -- A CPD commander shot while assisting a tactical team at a state government office building in downtown Chicago has died.

Chicago Police Department spokesman Anthony Guglielmi said the commander was shot before 2 p.m. Tuesday at the James R. Thompson Center, 100 W. Randolph. He was transported to Northwestern Memorial Hospital where he died.

Supt. Eddie Johnson identified him as 18th District Commander Paul Bauer, 53. Johnson said he leaves behind a wife and daughter.

Chicago Police Superintendent Eddie Johnson addresses the media to announce the death of 18th District Commander Paul Bauer, who was shot at the Thompson Center.

Supt. Eddie Johnson said an officer in the Loop tried to stop a suspect when that suspect got away.

That officer made a call over the radio, the audio of which was obtained by the I-Team: "I don't want anybody to get hurt. I just wanted to do a street stop on him and he took off on me, but he was in the area where we've had a lot of narcotic sales and a shooting on Saturday."

Other officers on the foot chase arrested the accused shooter, and he was captured on video being put in a police car. He had apparently been wearing a bulletproof vest. The suspect has not been identified and did not appear to be injured. Police said he has a record of numerous arrests and convictions, including drug, gun and armed robbery charges.

"We're in the plaza over here by the state building. Slow down, he's got cuffs on him and everything, just relax," an officer says on the radio recording. "They're on the plaza at the staircase."

At that moment the officers responding had no way to know that Bauer had just been shot and was incommunicado, wounded in a stairwell. He was spotted a moment later.

Bauer was a 31-year veteran of the Chicago Police Department.

His body was led in a procession from Northwestern to the medical examiner's office near Damen and Harrison on the West Side just after 5 p.m.

Mayor Rahm Emanuel was on a business trip to Los Angeles when the fatal shooting occurred. He returned to the city by nightfall and spoke at the 18th District's roll call.

"Think about Paul, selflessness was his standard. He's an individual defined by his decency and sense of duty," the mayor said.

But Bauer was known by far more than just his subordinates. He was a popular face at community meetings, and known for his casual approach to constituents, with monthly chats during his pet program, "Coffee with a Commander."

"Really just reached out to everybody, would be 20 to 30 people here and he would try to talk to each of them individually. It's how you know he cared," said Tucker Brookshre of Eva's Café.

Bauer and his 18th District officers were honored in January of 2017 with a resolution in City Council for 25 years of work hosting a charity holiday party for kids.

Bauer was previously the commander of the department's mounted patrol unit. He was a member of the mounted patrol, but promoted in 2015. He was in charge of the mounted unit in 2013 when the Blackhawks won the Stanley Cup. Officers on 30 horses kept control of the streets in Wrigleyville after people broke down police barricades.

Bauer was involved with the Chicago Police Memorial Foundation, which assists the families of fallen and injured officers. They released a statement, saying in part, "Commander Bauer's tragic passing is all the more painful to us because Paul was a friend of the Foundation and enthusiastically gave of his time and talents to support our mission to never forget the brave men and women who died in service to this great city."

He helped with the Horses of Honor project, in which 6-foot-tall, 6-foot-long horse statues were displayed downtown. Each horse, decorated by local artists, carried a minimum donation of $2,500 for the foundation. All but one of the horses was named after officers who died.

The Thompson Center, also known as the State of Illinois Building, is an atrium-style governmental building with commercial businesses on the first floor and a food court on the lower level.
EMBED More News Videos

A woman who was in the Thompson Center food court describes moments after the shooting.

The building was teeming with people at the time of the shooting. Witnesses described hearing yelling, followed by a handful of gunshots. They said when they heard the gunfire they had no idea how many shooters there were or where they were.

"I heard shots, and then I started thinking terrorist attack. Everybody started running. I'm talking about, it was like a scene out of a movie," said Daniel Ryan, witness.

"People started running to the escalator, and they were all trying to get up the escalator at the same time," said Deborah Graham, who was in the basement food court at the time of the shooting.

A woman who works on the 11th floor of a building across from the Thompson Center describes what she saw after shooting.

Several witnesses reported hearing up to five or six gunshots. Officers were seen outside the Thompson Center consoling each other after the shooting.

Witness Norman Talley describes what he saw immediately following the shooting of a CPD officer at the Thompson Center, including officers removing a vest from the suspect.

One witness saw the responding officers and paramedics trying to save Bauer's life.

"He was covered with blood, and they were pumping his chest as they were trying to get him on the stretcher," said Norman Talley, witness. "It was shocking to see, to be so close to it."

"I am deeply saddened at the senseless shooting of my friend and colleague Commander Paul Bauer with whom I stood shoulder to shoulder during the NATO protests," said former Chicago Police Supt. Garry McCarthy. "This hits especially close to home as my family live under Paul's watch in the 18th district. There are those officers you recognize when you meet them as special and Paul fit that mold to a 'T,' which is why I promoted him twice while I was Police Superintendent."

Our thoughts and prayers are with the family and colleagues of the officer tragically lost in a shooting at the Thompson Center today.

So grateful for the response and protection from the Illinois State Police Protective Services Unit in the aftermath. Thank you for keeping us safe.

Fraternal Order of Police President Kevin Graham, in a statement, said, "The FOP and its members mourn the senseless and tragic loss of Commander Bauer and ask for prayers for him and his family."

State Senator Kwame Raoul also issued a statement, saying, "Commander Bauer's actions were the height of heroism and civic duty. Together, as a community we must extend our love and comfort to his family and his colleagues as they grieve this horrible loss. I personally send my prayers and deepest condolences to his wife and daughter and all of his brothers and sisters on the force."

Streets around the Thompson Center, including Randolph, Lake, and Clark, were temporarily closed to traffic.

Norman Talley said he was standing inside the Thompson Center entrance when he heard a volley of gunshots and saw police officers swarming as hundreds of people scrambled outside.

Talley said he saw officers take a middle-aged man into custody, before paramedics wheeled out a person on a stretcher, covered by a blood-soaked white sheet, he said.

Attorney Deborah Martinez said she was walking into a courtroom on the 11th floor of the Daley Center when she saw people gathering by the window looking down on a sea of police vehicles gathering across the street outside the Thompson Center.

Martinez said she saw paramedics performing chest compressions on a person covered by a white sheet atop a stretcher.

"Right here in the Loop. It's insane," Martinez said.

Dan Ryan was chatting with an acquaintance outside the Thompson Center entrance when he saw a man bolting out of a Starbucks on Clark Street and a few people chasing after him.

"I thought he had swiped a purse or something," Ryan said.