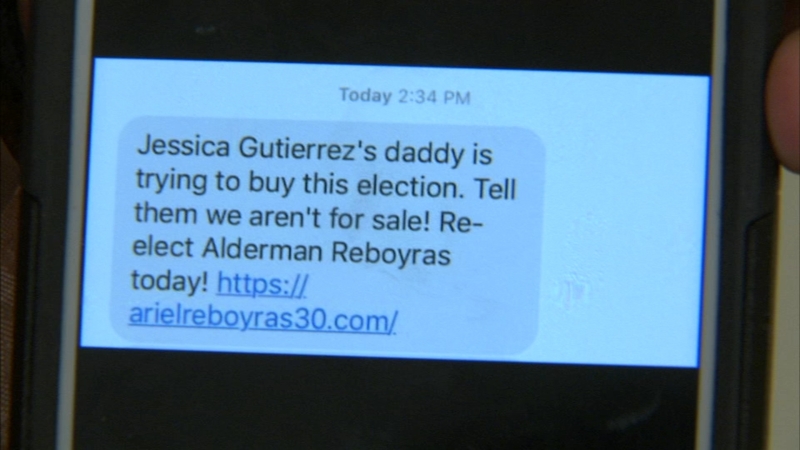 CHICAGO (WLS) -- A longtime Chicago alderman is trying to hold onto his seat in a runoff race against a challenger with political name recognition.

It's the first election in 16 years where Alderman Reboyras has been forced to put up so many campaign signs. The City Hall insider is in a tough fight against someone who sells herself as an outsider, though Gutierrez is no stranger to politics.

"He is a machine politician. He has been named as a top lieutenant of the Hispanic Democratic Organization," Gutierrez said.

Jessica is the daughter of former Congressman Luis Gutierrez - a close friend of Reboyras until Jessica decided to run against the alderman.

"I would personally go out and get petitions for him, and I never thought this would happen," Reboyras said.

Reboyras' anger toward the Gutierrez's is reflected in this text message sent out to 30th Ward voters that says: "Jessica Gutierrez's daddy is trying to buy this election. Tell them we are not for sale! Re-elect Alderman Reboyras today."

"To say I'm daddy's little girl should be offensive to every women that lives in the 30th Ward," she said.

As she tries to carve her own path running on a progressive agenda, Gutierrez likes to remind voters that Reboyras is a product of patronage politics from Mayor Richard M. Daley. While he has voted with Daley and Mayor Emanuel almost 100 percent of the time, the alderman said his Northwest Side ward has prospered from his loyalty.

"If you get what you want in your ward and there is a reason behind it, why not? We've gotten new playgrounds in every park district in the ward," Reboyras said.

It will be a busy weekend for both candidates, considering how close the February election was between them. Alderman Reboyras beat Jessica Gutierrez by 27 votes.