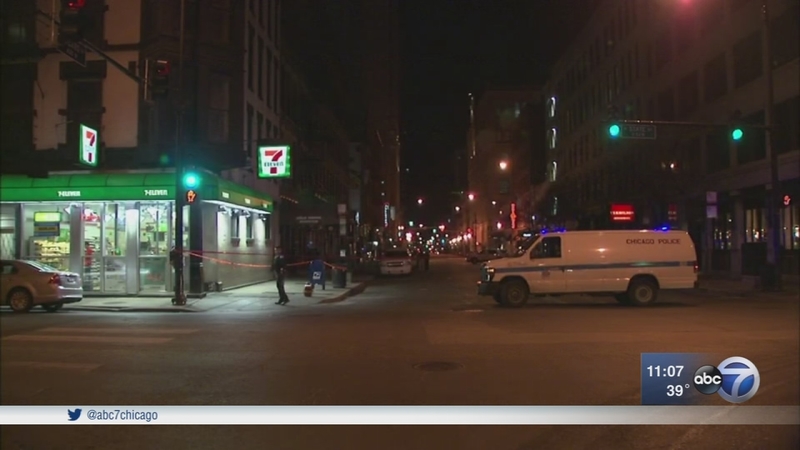 Police have not disclosed the weapon used, but sources said it may have been a machete.

A 55-year-old man staggered out of an alley in the 400-block of North State Street with a stab wound to his neck at about 2:30 a.m. He later died at Northwestern Memorial Hospital. Authorities have not released his identity.

Police have not mentioned details on a suspect, but sources on the scene tell ABC7 that the suspect fled the scene by running to a nearby "L" stop. No one is in custody.

Luis Sanchez was emptying the dumpsters in the alley less than 20 minutes before the stabbing.

"We need security over here, more police. This is a big problem in the streets," Sanchez said.

Sanchez is one of several business owners and employees calling for a greater police presence after the stabbing. Nearby bar owner Dennis McCarthy says it's bad for business.

"It's not something we want to see on TV with the neighborhood," he said.

McCarthy says the uncertainty around the stabbing is unsettling.

"Wondering just who it was and how it happened," he said.

Brian Gurber works right behind the alley where it happened.

"It's concerning. You think this is a professional area, there's a lot of businesses over here, you kind of think twice about where you are and it's kind of concerning," he said.
Report a correction or typo
Related topics:
river northchicagochicago crimestabbing
Copyright © 2021 WLS-TV. All Rights Reserved.
TOP STORIES
CPD elective time 'restricted' for foreseeable future: internal memo
When will mask mandate end? Chicago's top doctor weighs in
Heaviest pumpkin in US disqualified for crack
Dixmoor residents without water much of weekend after main break
Bali earthquake kills at least 3
DJ Khaled's CBD skincare pop-up staying longer in Chicago
Evidence of water vapor found on 1 of Jupiter moons: NASA
Show More
At least 18 shot, 2 fatally, in Chicago weekend violence: CPD
Make-A-Wish walk back in-person with over 500K wishes granted
Bill Clinton released from UCI Medical Center after blood infection
Woman, 82, dies after being hit by car in North Lawndale: CPD
SC teacher fired after student pulls weed gummies from prize box
More TOP STORIES News