An ABC7 I-Team Investigation
WLS
By Chuck Goudie and Barb Markoff
CHICAGO (WLS) -- A horrifying hospital incident, in which a nurse was held hostage, tortured and raped by an inmate, has spawned Illinois legislation to better protect healthcare workers.

The attack occurred one year ago at Northwestern Medicine Delnor Hospital in Geneva when Kane County prisoner Tywon Salters, 21, attacked and brutalized a nurse. Salters, an accused car thief with a long criminal history, was being treated for eating a jail-issued sandal and washing it down with cleaning fluid.
Legislation was being retooled by the Illinois House on Wednesday and would require violence prevention training for healthcare workers and hold hospitals accountable for protecting employees.

On May 13, 2017, while Salters was supposed to be in custody at the hospital, he overpowered a guard and stole his 9mm pistol, then walk naked down a hospital hallway. Authorities said he took the first nurse he encountered hostage and grabbed a second nurse a short time later. That second nurse was pistol-whipped and raped at gunpoint.

State Rep. Stephanie Kifowit (D-Oswego) sponsored the new legislation that would require a workplace violence prevention program, including an analysis that identifies any potential hazards.

"It's shocking when you hear first-hand accounts" Rep. Kifowit told the ABC7 I-Team in an interview. "It's an everyday occurrence that people wanted to just sweep under the rug and say well because you're a nurse you should be subject to violence and to me that's just unacceptable."

The proposed law also has a whistleblower component that bars employers from discouraging nurses or other workers from reporting incidents to law enforcement, and cannot retaliate against those who do. Kifowit says she hopes that the bill will pass a House vote this week and then be approved by the Senate before being sent on to Governor Rauner for his signature.

"In this legislation we are actually creating a new high risk prisoner transport training program" she said. "There will be training for deputies so that they are trained in high risk, high stress situations so that the situations such as Delnor will hopefully never happen again."

During the Delnor incident a year ago, negotiations between Kane County SWAT officers and Salters fell apart after a few hours and the police team stormed his room. Salters was shot dead during the breach. An Illinois State Police investigation of the how prisoner attack happened was recently completed and turned over to Kane County officials. That official report of the incident has yet to made public and county authorities say the matter is still being independently reviewed.
"We're a year out from Delnor and we don't see a lot of change in the industry" said former deputy U.S. marshal James Smith, now a workplace violence expert with Silver Star Security.

Smith says he is impressed by the legislation and says training and procedures have to be in place to protect health care employees.

"It's unfortunate that when we do have sit downs with hospital administrators or staff and when we come in and talk to them and say you need protocols in place and you need to follow the policy, some don't have policies at all in regard to prisoner patients," Smith said.

On Saturday, Smith will participate in a free seminar for front line health workers, instructing them on how to deal with "violence in medical settings and mitigating the risks associated with forensic patients."

Four nurses, including the two held hostage, and two patients have filed a federal lawsuit against Kane County, the sheriff's deputy who was guarding Salters, the hospital and its security company. The cases had been assigned to District Court Judge Amy J. St. Eve.

After St. Eve's appoint to the 7th Circuit of Appeals was confirmed on Wednesday a new judge was assigned to hear the case. Judge Virginia M. Kendall will now preside over the hospital lawsuits.
Report a correction or typo
Related topics:
genevasafetylegislationhospitalnursesi team
Copyright © 2020 WLS-TV. All Rights Reserved.
RELATED 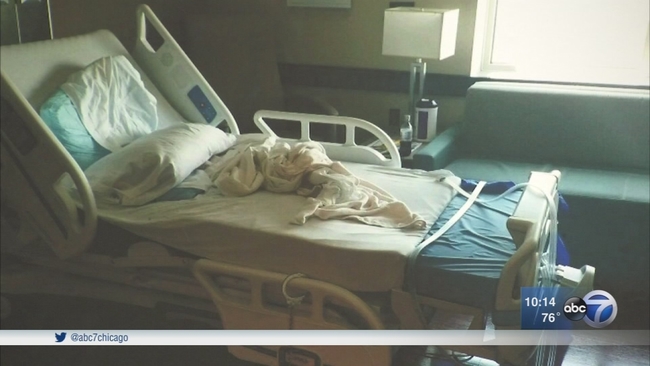