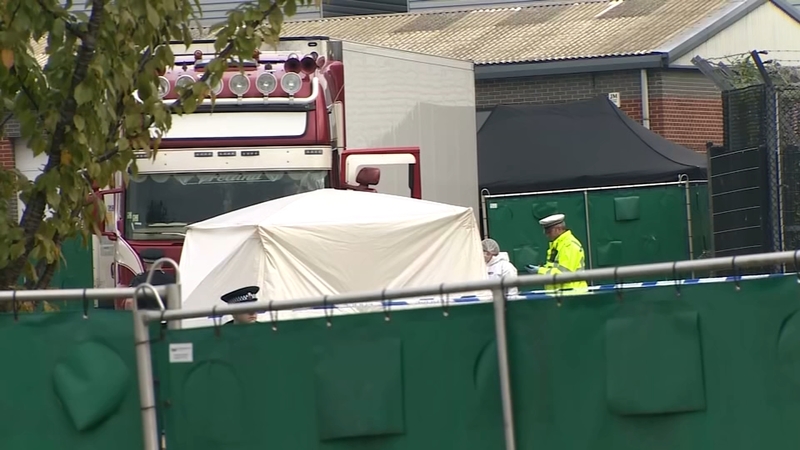 LONDON -- All 39 people who were found dead in a truck in a UK industrial park on Wednesday were Chinese nationals, British police said Thursday, as officers in England, Northern Ireland and Belgium scrambled to establish the chain of events that led to the tragic incident.

The cause of death of the eight women and 31 men has yet to be established, Essex Police said in a statement. The victims were discovered in a container at the back of the truck, at an industrial park in Grays, Essex, a town 20 miles east of London.

Police believe the container came from Belgium into England early Wednesday morning, while the journey of the truck that transported it is believed to have originated in Northern Ireland, reported CNN.

"At this point we don't know whether these people entered the container at (the Belgian port of) Zeebrugge or whether it arrived with them already onboard," van der Sypt told CNN, adding that the container arrived at 2.49 p.m local time on Tuesday and was shipped out of the port the same day.

Zeebrugge has been known by British authorities as a hotspot for "clandestine attempts" to enter the UK through concealment in heavy goods vehicles, the National Crime Agency (NCA) said in a 2019 report.

"We work closely with the NCA and have done so for a long time now," van der Sypt told CNN. "It is not new that Zeebrugge has been targeted by people traffickers for a while. Our focus is now to determine who was responsible at this end and identify any other parties who may be implicated."

The container arrived early Wednesday morning at Purfleet, a town on the River Thames, according to authorities, where it was collected by a red Scania truck and transported to Waterglade Industrial Park in Grays, Essex.

Police -- who were called to the scene at around 1.40 a.m. UK time on Wednesday -- said the victims were found dead on the scene.

Road haulage experts said the truck appeared to be refrigerated. That could mean freezing temperatures of anywhere between -5 to -10 degrees Fahrenheit (-20C to -23C), said Richard Burnett, chief executive of trade body the Road Haulage Association, making conditions "absolutely horrendous" for anyone stuck inside.

In Northern Ireland, CNN witnessed forces search two properties in County Armagh, southwest of Belfast. Local residents identified one of the properties as the home of Robinson's parents.

They also told CNN that Robinson's parents have traveled to England to support him.

Police said Thursday that the suspect remained in custody and confirmed that three properties were searched in County Armagh.

In a statement to CNN, the China's Ministry of Foreign Affairs said Chinese embassy staff in the UK "are en route to the scene to verify relevant information."

"We read with heavy heart the reports about the death of 39 people in Essex, England. We are in close contact with the British police to seek clarification and confirmation of the relevant reports, " China's embassy in the UK said in a statement.

This week's events are a painful reminder of the tragic events in 2000, when 58 Chinese migrants were found dead in a lorry in Dover.

In 2004, 23 Chinese migrants, who were picking cockles, died at Morecambe Bay, northwest England, when they were caught by an incoming tide.

A government report released this month found that in 2018 China was the fourth most common country of origin for potential victims of modern slavery in the UK.