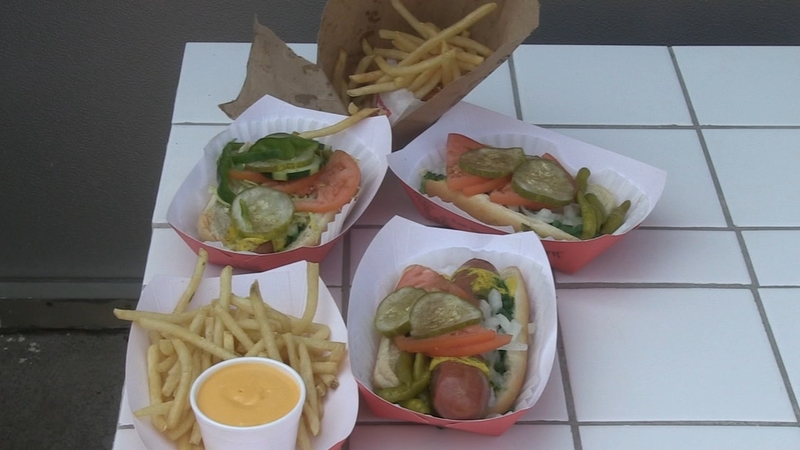 CHICAGO (WLS) -- We all know Chicago has the best hot dogs in the world, but where do they come from?

The Vienna Beef Company was founded 125 years ago, at the Columbian Exposition in 1893 - talk about a legacy.

Vienna moved its production from their Damen Avenue plant on the North Side to a new facility on the South Side about three years ago. There, they produce about 90,000 pounds of dogs each day.

The recipe hasn't changed much over 125 years. In their South Side plant, butchers work quickly to trim fat from briskets and other whole muscle meats, including bottom round flats. The scraps and other trimmings get ground up immediately.

"They go up to the tower to get sampled for fat, lean, protein and moisture," said Steve Schmidt, who's been at Vienna for 47 years. "They do an analysis, and from that analysis, that's how they find out how to make the right hot dog day in and day out."

The ground beef is transferred to giant vacuum choppers that look like space ships and are emulsified with seasonings.

"Extract the protein, they change it from a ground state to an emulsified state, they add the flavorings, and then it's ready to be stuffed on the stuffing line," said Schmidt.

There are natural casings - those are sheep intestines, by the way - as well as skinless ones. The dogs are assembled on large racks, which are then wheeled into enormous smokers, where hickory chip smoke is blown over them until they're cooked.

Black lines on a dog means it's skinless. Once cooled down in a shower, those protective casings are quickly cut off in machine gun fashion. Then, they're assembled and checked for quality control and packaged to go out to stores, restaurants and stands everywhere.

One of those customers is Byron's Hot Dogs, which has been in business since 1975 just north of Wrigley Field. They prefer skinless dogs, which is not the norm for most stands.

Also, in a surprise move, they do not nestle them into poppy seed buns.

"We don't like them to get stuck in our customer's teeth," he said.

"We're actually the only hot dog stand in Chicago that I know of that has three sizes of hot dogs. Our regular hot dog is an eight-to-one, we have a jumbo which is a four-to-one, then we have the Dogzilla, which is a two-to-one," he said.

In Steve's Extra Course Video, he goes back to Byron's to try one of their special double cheeseburgers that comes with gyros on top.

In Steve's Extra Course video, he goes back to Byron's to try one of their special double cheeseburgers that comes with gyros on top.