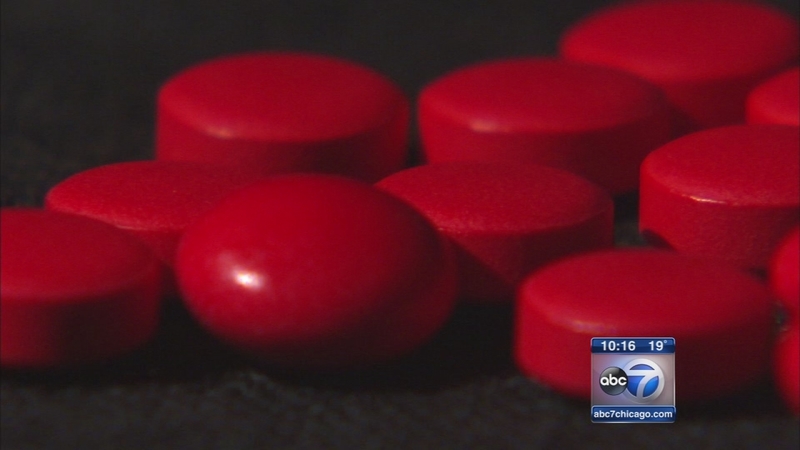 CHICAGO (WLS) -- The ABC7 I-Team uncovered a popular cold remedy abused by teenagers, endangering them, and in many cases, fooling their parents. It's an addictive over-the-counter drug that many parents don't know about.

Parents may worry about their teenagers using marijuana, "molly" or heroin, but there is a legal, easy high experts warn many are overlooking.

Teens call it "Triple C." It's available without a prescription and the pills can produce a potent, hallucinogenic high when taken by the handful.

"After the first time I did it I just really loved it. I would take them when I got up in the morning, before school, during school, after school, before I went to bed," said Shannon, a recovering addict.

This suburban Chicago teenager swallowed more than a dozen of these pills the first time she abused Dextromethorphan, or DXM, at age 13. Her friends called it Triple C.

"I hallucinated a lot. It was kind of like I was in a dream or something, like so disassociated. I liked that feeling of not being in reality. And I just kept using it after that," Shannon said.

Now 18, Shannon - who asked that we just use her first name - has spent the past several years in and out of rehab. She has been clean since May and lives at Marlowe House, part of the Rosecrance Substance Abuse Rehabilitation Campus in Rockford.

"There's just a lot of tools here that I learned that I can do at home," Shannon said.

Dr. Thomas Wright is the chief medical officer at Rosecrance. He says parents are often unaware that teens abuse these products, despite packaging intended to alert parents to potential teen abuse and warnings that only one tablet should be taken every six hours.

"It's something so common that it's a part of the story of virtually every one, every adolescent that has a substance abuse problem," said Dr. Wright.

"Those could be some of the long-term problems with it, some learning problems and memory issues," said Dr. Wright.

The I-Team visited drugstores throughout Chicago and the suburbs and found a variety of easily accessible medications containing DXM. Some of the pills are packaged in protective plastic containers, making them more difficult to steal. But most of it was just sitting on store shelves.

The I-Team found a row for Coricidin, Cough and Cold completely empty. An employee said it was because people steal it. Shannon says that is how she got her drugs.

"I only stole them. I never bought them. I lived right next to a Jewel so I would just walk over there, grab them and walk out so it was really easy for me to get," Shannon said.

For some, the Triple C "easy high" is a badge of honor on social media.

You Tube is loaded with videos of teenagers who have recorded themselves and their friends taking piles of the meds, and the dangerous behavior that follows.

"Things that parents should always look for, going out with different friends, sleep problems, laughing a lot, sweating when they shouldn't be," said Dr. Wright.

Shannon says her dad begged her to stop using after she swallowed more than 100 pills and was hospitalized for weeks.

"I almost died and that was kind of my wake up call," Shannon said.

Despite her addiction, Shannon managed to graduate from her northwest suburban high school this year, and plans to start college in January.

"Now I've found a whole new way of life that I never thought was possible and that's what really changed everything for me," Shannon said.

Because of the widespread abuse of DXM, the Drug Enforcement Administration now monitors the medication. Some stores have a policy that you must be 18 to purchase certain cough and cold medicines.