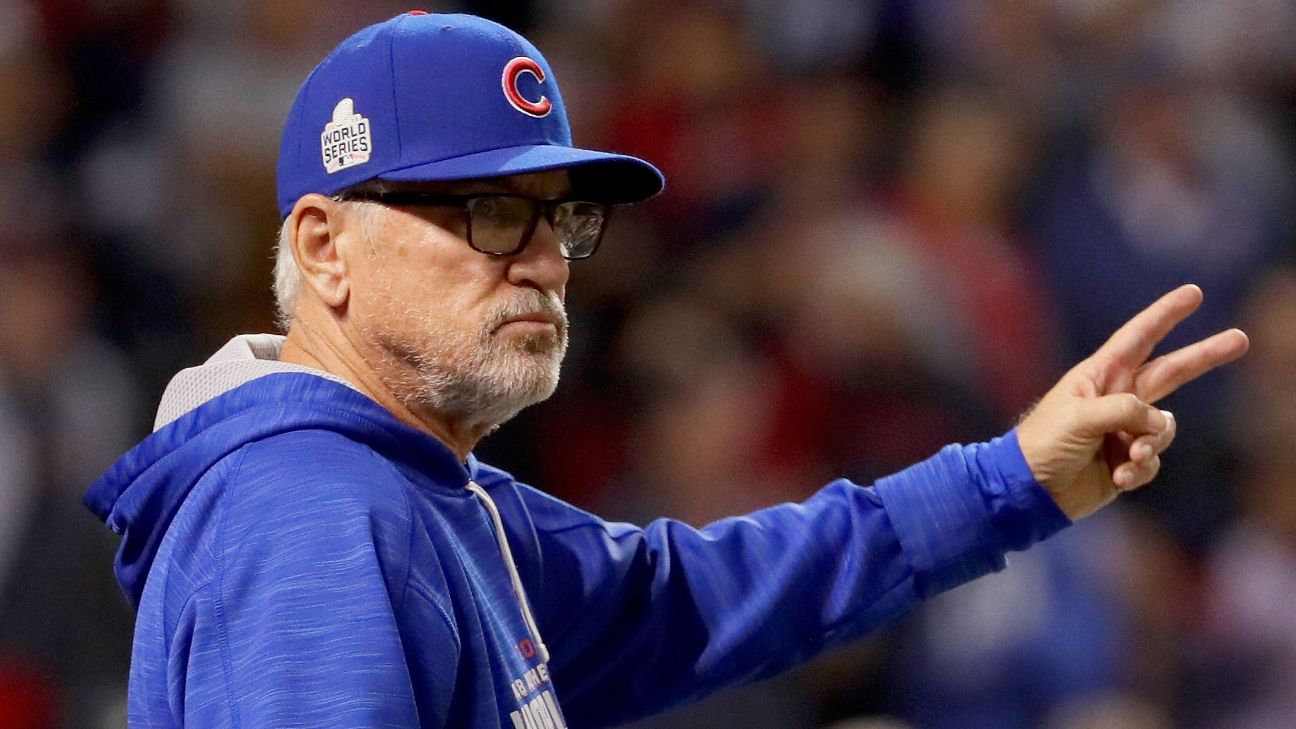 ESPN
By Jesse Rogers
PHOENIX -- The road to a World Series title has gotten a little tougher for the Chicago Cubs, as they'll have to navigate October without closer Brandon Morrow due to a nagging bone bruise in his right forearm -- assuming they make the playoffs, of course. The news, delivered on Tuesday afternoon, came on the heels of his backup, Pedro Strop, pulling a hamstring and placing his October effectiveness in jeopardy.

Part of the narrative regarding the two players revolves around who is to blame for the injuries. It's possible to draw a direct line from their issues back to Cubs manager Joe Maddon. On Tuesday, team president Theo Epstein documented the timeline regarding Morrow first feeling pain in his arm. It came in early June, after Maddon used him in three straight games.

"He did say it bothered him after that," Maddon said Wednesday. "You can't dispute that."

The Cubs tried the entire second half of the season to get Morrow healthy enough for the stretch run, but the bruise never healed. In Morrow's absence, Strop took over the reins as closer, earning 11 saves while compiling a nifty .475 OPS against. But on Sept. 13, Maddon had Strop bat in the 10th inning of a game at Washington, which resulted in disaster. Strop pulled his hamstring trying to beat out a double-play ball.

"It's unfortunate," Maddon said at the time. "I never saw an injury coming."

As a result, Maddon, Epstein and the Cubs have less than two weeks to reconfigure their bullpen for October. They'll need to do it with the assumption Strop won't be back right away, though there is a chance he could be ready by the division series. What's the vibe without Morrow and Strop?

"It would be real nice to be one of those teams that had the best bullpen ERA in the league," Epstein said sarcastically. "Oh wait, that's us, by like a third of a run. And it's more than one or two guys. We've had a deep group all year."

The numbers back him up, as the Cubs rank first overall in bullpen ERA in the National League; and even with some trying times in the second half, they still rank fourth in the league since the All-Star break. But the idea of mixing and matching their way to a World Series title still seems like a difficult task.

Then again, Maddon can turn the narrative regarding the injuries upside down if he's able to navigate through the postseason with less than Aroldis Chapman (his closer in 2016), Wade Davis (2017) or Morrow/Strop. One silver lining to Morrow's injury is that he has been out since the All-Star break, giving others a chance to ascend in the pen. In fact, the past five saves for the Cubs have come from five different pitchers.

"The guys have gained valuable experience," Maddon said. "A lot of guys that would not have pitched nearly as much have, and so now we're in this position."

The position entails a lot of experience for some while others are getting their first taste of ninth-inning stress. Steve Cishek has 125 career saves but just five over the past two seasons. Jesse Chavez has earned three of his six career saves this season. Then there is journeymanJorge De La Rosa, who picked up his first career save last week in career appearance No. 425.

"I'm not a closer," De La Rosa said. "I think they put me there that day because no one else was available. I'm ready when they need me."

That's not exactly "ride the ninth-inning guy" stuff from De La Rosa, but he knows he's not likely to be on the firing line come October. At least we don't think he will be. So who will? Or will Maddon be the type to use three relievers to get three ninth-inning outs in a one-run game? He might. But all signs point to formerly maligned lefty Justin Wilson getting the call when all things are equal. He has straightened out his game after hosting a walkfest upon being acquired in July 2017.

"He could be the linchpin," Maddon said. "I've been saying that since spring training. He can get lefties and righties out."

Therein lies the key. In fact, Wilson has a higher OPS allowed against lefties (.651) than righties (.641) this season. And he has ninth-inning experience, having closed for theDetroit Tigersin the first half of 2017. But you probably won't meet a Cubs fan who completely trusts him despite a solid year. His control problems always seem to be lurking behind the scenes. At least that's the perception.

"When I struggled, my mentality on the mound never changed," Wilson said. "I wanted to be out there and be aggressive. ... I'm not fighting myself anymore out there."

The key for Maddon might be to have another arm ready, no matter who gets the ninth inning. He likely can't rely on one person for three rounds of the postseason. Wilson might get the first crack, but he probably won't be the only one.

"It's always nice to have that [one] guy," Maddon said. "However, there are other guys. These other guys have done a fantastic job. If we continue to match them up and don't beat up anybody, we can continue the same trend."

The veteran Chavez has to be part of that mix as well. So is Carl Edwards Jr., who might have the best stuff of them all when he's on. He hasn't been on lately, but the Cubs aren't giving up hope.

Maddon will need to be precise with his decision-making, no easy task for any manager in October. Then again, the Cubs just won a game with Dillon Maples, Jaime Garcia and De La Rosa pitching the seventh, eighth and ninth innings. Baseball can bring some weird moments, even for potential division winners. That was one of them.

"Our ninth-inning guy was DFA'd a month ago, our eighth-inning guy had been released two weeks ago and our seventh-inning guy spent a lot of time in the minor leagues trying to figure out how not to get released," Epstein said with a smile. "It says a lot about the mettle of those guys."

But will any of them be able to do it next month? Everything changes once the postseason begins. The front office knows it, the players know it and Maddon most definitely knows it. It'll be his job to figure out who to call on, then the pitchers have to perform.

"It's not exactly the way we drew it up, but we have quality relievers out there who are unafraid," Epstein said. "The quality of our bullpen is being overlooked."

"Of course it can be done," he said. "We have a nice cache. If we can jab with these guys at the right time, they'll play."
Report a correction or typo
Related topics:
sportsespnrelieversmlbbullpenjoe maddonchicago cubscloser
Copyright © 2020 ESPN Internet Ventures. All rights reserved.
More Videos
From CNN Newsource affiliates
TOP STORIES