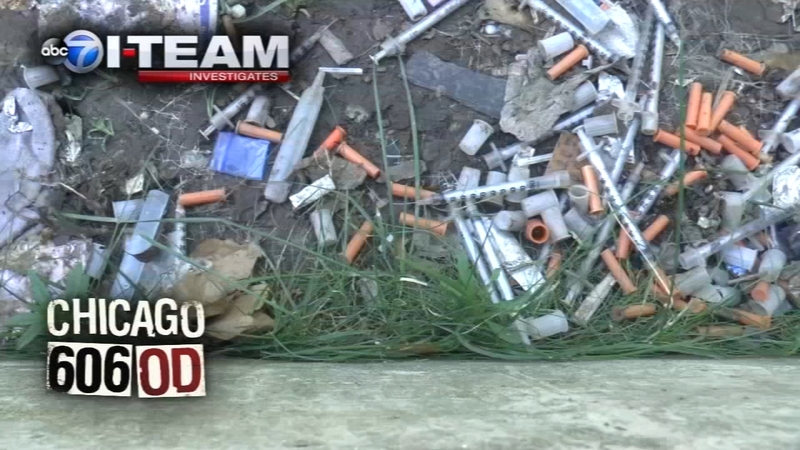 CHICAGO (WLS) -- As Chinese drug profiteers have flooded U.S. markets with illicit opioids the past few years, fueling a raging and deadly epidemic, the traditional Mexican cartels are now elbowing their way into Chicago and other metro areas, according to a new report by the U.S. Drug Enforcement Administration.

Heroin, fentanyl and other opioids continue to be the highest drug threat in the nation according to the National Drug Threat Assessment obtained Friday by the ABC7 I-Team.

Even though overdose deaths in Chicago and many other locations have begun to level off, the threat and death count are both still considered "high."

Chicago, a longtime hub for Mexican heroin and cocaine imports to the U.S., is now also a feeder point for cartel shipments of illicit opioid drugs smuggled along the conventional supply lines.

According to the new DEA report, methamphetamine and cocaine are being seen at much higher levels and in areas that historically been not been considered hot spots for those drugs.

As the I-Team has reported, Mexico's Sinaloa cartel has the largest footprint in Chicago and many other major U.S. cities. That is the drug organization once operated by Joaquin "El Chapo" Guzman, set to go on trial next week in New York City. The I-Team reported this week that federal authorities now believe El Chapo's sons have stepped in to run the organization while their father faces life in prison if he is convicted.

Monday at 10 p.m. the I-Team will report "Chapo, Illinois," a look into the drug lord's grip on Chicago and how his former underlings from here figure into the New York prosecution.

There is still a burgeoning problem of illicit drugs arriving into the U.S. from China in the mail. Investigators in Chicago, considered a major import site for Chinese-made fentanyl ordered over the internet, say they have stepped up sniffer dog inspections of packages arriving at O'Hare on air freight flights from Asia.

"They (the Chinese) are shot-gunning tons and tons of things through" said Francis Byrne, a Customs and Border Protection officer at O'Hare. "Enough slips by so they can make some money on it and the cost to manufacturing these things in China are so low so if they lose most of their narcotics they are sending they still make a lot of money."

Until two weeks ago the U.S. Postal Service may actually have been subsidizing the opioid threat from China. USPS had been steeply discounting shipping rates on small packages from China by as much as 70 percent.

Other highlights of the DEA threat assessment:

-- Heroin-related drug-poisoning deaths almost doubled between 2013 and 2016. This has been exacerbated by the increased adulteration of heroin with fentanyl and other synthetic opioids. Heroin available in U.S. markets is primarily sourced from Mexico, where opium poppy cultivation and heroin production have both increased significantly in recent years.

-- Of all opioids, the abuse of illicit fentanyl and other synthetic opioids has led to the greatest number of deaths in the United States. Fentanyl is increasingly available in the form of counterfeit prescription pills marketed for illicit street sales, and also sold by traffickers on its own, without the presence of other drugs.

-- In 2017, synthetic opioids such as fentanyl were involved in nearly 30,000 deaths, and from 2016-2017, Mexican heroin production grew by 37 percent. Mexican cartels continue to make large quantities of cheap methamphetamine and deliver it to the United States through the Southern border. Seizures at the border increased from 8,900 pounds in 2010 to nearly 82,000 pounds thus far in 2018.

-- National and neighborhood-based street gangs and prison gangs continue to dominate the market for the street sales and distribution of illicit drugs in their respective territories throughout the country. Drug trafficking remains the major income source for gangs.

-- Marijuana remains the most commonly used illicit drug in the United States.