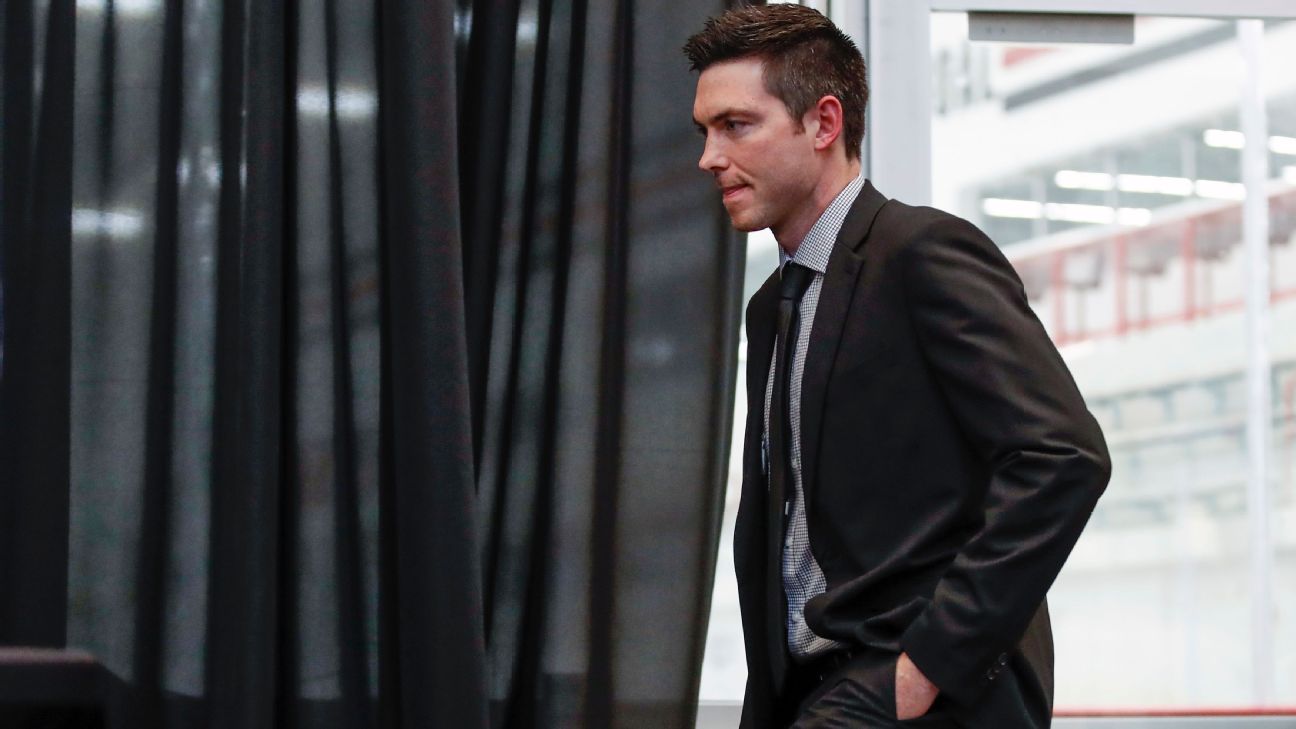 ESPN
Jeremy Colliton begins his Chicago Blackhawks coaching tenure Thursday night, and he's got support from an unlikely source. He received a congratulatory text from the man he replaced, Joel Quenneville.

"It means a lot," Colliton said, according to The Athletic. "He's a Hall of Fame coach and I'm succeeding him and took the time to send me a text message. Again, he's a great man."

The 33-year-old Colliton is now the youngest coach in the league, taking over for a legend who won three Stanley Cups for Chicago. Colliton won't have much of a grace period with the Hawks riding a five-game losing streak.

Colliton, who was promoted from Chicago's American Hockey League franchise in suburban Rockford, will make his debut at home against the Carolina Hurricanes. After the Blackhawks front office decided Quenneville was no longer the right choice to put the franchise back on a path for playoff success, the message to Colliton become one of urgency. The Blackhawks will carry a 6-6-3 record into Thursday's game and although Chicago's recent skid wasn't the sole reason for Quenneville's ouster, it played a part.

"A decision like this isn't made on one game, one play, or one specific thing," Blackhawks general manager Stan Bowman told reporters during Tuesday's press conference. "It's sort of a collection of things. Certainly, the road trip was concerning. But I think even heading into that there were some elements to our game where they weren't where they needed to be. It's not just based off the record of the team, so it's more a totality of circumstances than it is just based on one specific game."

Now, with Colliton in place, the Blackhawks must quickly turn the page from its recent struggles but must do so under a coach they are just getting to know.

"Ultimately, it's about winning," Colliton told reporters, according to the Chicago Tribune. "I have to earn their trust by them believing that I can help them win, that I can help them be better individually, that we as a staff can put together a plan so they can have success. So if I can do that, there's no problem. It doesn't matter how old I am."

The Hurricanes have lost five straight games heading into Thursday's date with the Blackhawks and are 2-7-1 in their last 10 games. Carolina dropped a 4-1 decision to the St. Louis Blues on Tuesday and have managed just four goals in their past three games. This all comes after Carolina started the season 4-0-1.

While Carolina won't have to worry about the kind of transition the Blackhawks face, the Hurricanes have a similar mission to get back to finding a way to play winning hockey. The Hurricanes have struggled of late despite leading the league in shots per game (41.8) and shots allowed per game (24.8).

"We should be frustrated," Hurricanes coach Rod Brind'Amour said after Tuesday's loss, according to NHL.com. "I would hope so, but we've got to park it and come back and show all the stuff we've done well. Do the stuff that we need to clean up. We can't keep giving up goals early, but at some point, these chances are going to go in for us and as long as our game is solid, then we're going to get straight."

2 workers at Evergreen Park Walmart die of COVID-19
Holy Week services streamed online during the coronavirus crisis
Potentially forgivable loans available for small businesses
'90% chance of hope': Arlington Heights couple recovers from coronavirus
How to get health insurance if you lost your job during COVID-19 pandemic
Show More
What to know about Illinois' 8,904 COVID-19 cases
Chicago AccuWeather: Increasing clouds, cooler
Face coverings recommended, but Trump says he won't wear one
Free educational resources for kids stuck at home
Some in US may not get stimulus checks until August. Here's why.
More TOP STORIES News