Inside the NHL's Finnish invasion, and what comes next 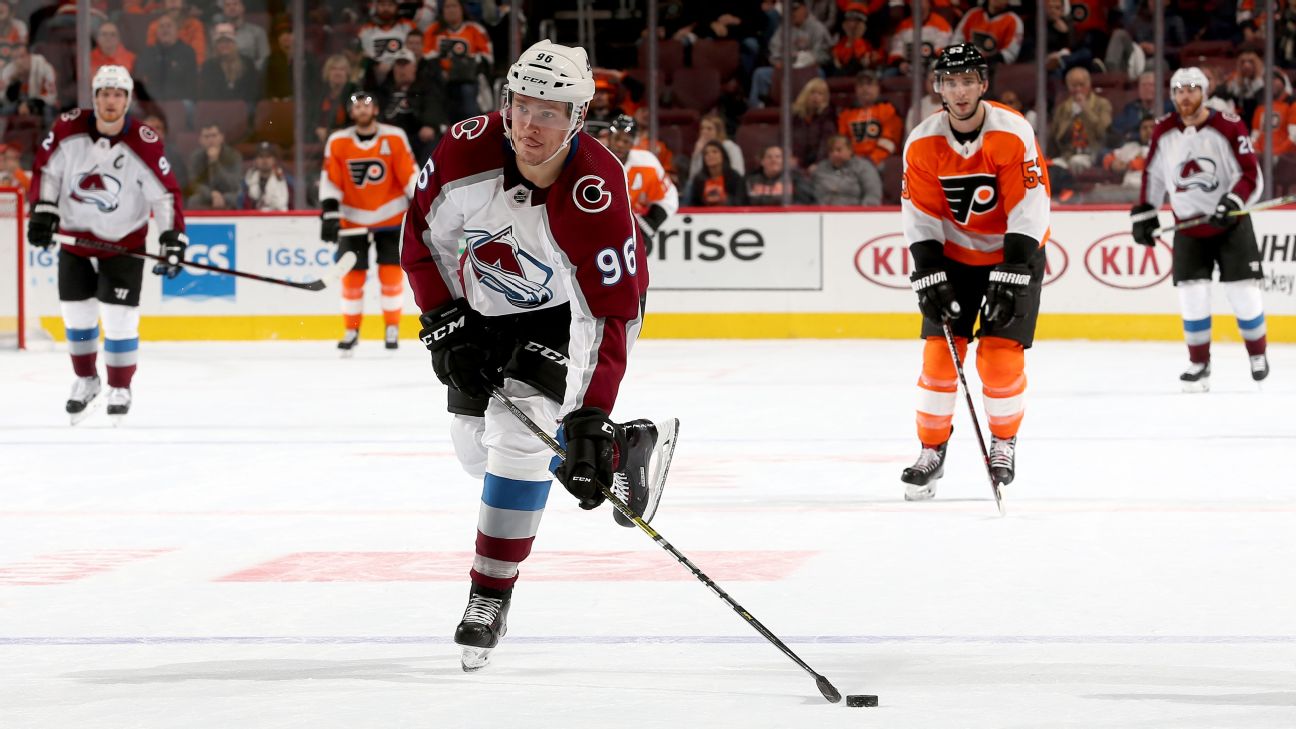 ESPN
By Emily Kaplan
The NHL held two regular-season games in Helsinki in October as part of its Global Series initiative. Though the NHL has been keen on cultivating its European audience for some time, the timing in Finland could not be better. Finnish interest in the NHL has never been higher. And Finnish players have never been competing at a higher level in the NHL.

"It's a pretty exciting time for Finland, for sure," says 19-year-old Henri Jokiharju, who is logging big minutes with Duncan Keith on the Chicago Blackhawks' top defensive pairing.

"It's always been big back home," says Florida Panthers captain Aleksander Barkov, who spent the Finnish leg of the Global Series as one of the main ambassadors, alongside good friend Patrik Laine of the Winnipeg Jets. "But it's getting bigger and bigger. I think just because of the success you are seeing from Finnish players."

Those players that Barkov is referring to? Almost all of them are young and ascending, including Barkov himself, who many NHL players consider the most underrated star player in the league. There were hints of the Finnish renaissance over the past few seasons, but only now is it truly pronounced.

Colorado Avalanche winger Mikko Rantanen, 22, is leading the league in points, with 26 in 17 games. Carolina Hurricanes center Sebastian Aho, 21, is not far behind with 20 points in 17 games leading into today's game against the Blackhawks (7 p.m. ET, ESPN+). While Laine is off to a slow start, by his standards, the 20-year-old chased Alex Ovechkin for the Rocket Richard Trophy until last season's final days. Kasperi Kapanen (who once was on a Finnish postage stamp after scoring the 2016 World Junior Championship-winning goal) has plugged in well on Toronto's second line in William Nylander's absence. He's just 22. Jokiharu and fellow 19-year-old defenseman Miro Heiskanen of the Dallas Stars (skating 22-plus minutes per game) are deserving of Calder Trophy nominations, though the award for rookie of the year is typically given to a forward.

"We've had a lot of good NHL players, maybe the quality is becoming a little larger now with so many good young players at the same time," says Columbus Blue Jackets GM Jarmo Kekalainen, who skated in 55 NHL games and is now the first European-born general manager in the NHL.

There are a record 43 Finns who have made NHL rosters this season, quite impressive considering it's a country of only 5.5 million. In fact, last season marked the first time there were more Finns in the league than Russians (a country of 144.5 million). Of course, the steady Russian decline is partly because the Russian-based KHL is an attractive alternative for homegrown talent. The Finns would probably prefer to be compared to their natural geographical rival Sweden. With double the population of Finland, Sweden has 77 players in the NHL this season (last season there were a record 98 Swedish players).

"It's a small country, so it's not going to be a genetic advantage [to be] from Finland," Kekalainen says. "There's only so many people, 5.5 million people in the whole country. I think the best athletes do play hockey a lot of time because hockey is the most popular sport, but credit must go to coaching at the youth level, as well as the federation."

More interesting, though, is the type of Finns we're seeing skating in the NHL. Outside of Teemu Selanne and Jari Kurri, there have been few Finnish superstars besides goaltenders, as well as a handful of defensemen. The next most notable Finns are the Koivu brothers (Mikko, the current captain of the Minnesota Wild, and Saku, who last played in 2013-14) though they are known for playing a responsible two-way game.

"Most of the Finns you used to see in the NHL were grinders, or third-line guys," says Sami Hoffren, a Finnish journalist who is based in Toronto and reports on the NHL for the Finnish newspaper, Ilta-Sanomat. "Ten years ago, we had a lot of good players, but they were over 25 years old, close to 30. This is by far the most impressive group yet. And when you look at the kind of players they are, they are young star players that are just coming up."

The impetus for this change, Hoffren explains, was a 2009 summit held by the Finnish Ice Hockey Association. (Sweden held a similar summit in 2002.) The governing body of Finland noticed a stunt in development, so it convened scouts, coaches, former national team players and general managers for a think tank.

Kekalainen, who attended the summit, says nearly every aspect of hockey development was discussed. "We had a good example in Sweden. They had a lot of first-round picks and a lot of top players develop through their system and go into the NHL. We were falling behind, and that was one reason to get concerned. The junior national teams were not having success as they had before, the national team was not getting players from the youth system."

What came out of the summit? A commitment to identify and nurture individual talent. Or, in other words, they began teaching superstars to flourish. "One of the perks for a small country is that you can make big maneuvers in a small time," Hoffren says. "Players who were born between 1985 and 1992, it was like a black hole of Finnish hockey. We're out of that now."

Explains Kekalainen: "You don't really have to sacrifice the team concept that always made the national team very successful. We always had great goaltending, and we played very hard, disciplined as a team. That basically kept us in every game when we were lacking with a game-breaker type individual. Obviously we had Kurri, Selanne and Koivu, and [Jere] Lehtinen and that type of player, and good defensemen too, like Kimmo Timonen and [Jyrki] Lumme. There's a lot of good players in the history of Finnish hockey in general, but you're probably right, the national team and the under-18 and under-20 level, a lot of times looked like 20 grinding players that were all playing for team success. What we were lacking was that game-breaking type player like Patrik Laine or Barkov or Aho are nowadays."

As for the influx of Finns in the NHL, Hoffren attributes a few factors. Participation has never been higher. The IHF reports 76,000 registered hockey players in Finland for 2017-18, up about 10,000 from six years ago. "Also, the Finnish League isn't really good right now," Hoffren says. "There are young guys and older guys there, but the guys that are playing the best hockey of their career, they are either in the NHL, if they're good enough, or the KHL or playing in Switzerland."

It helps that the perception of European-born players has changed as well. "European players were labeled as soft because the North American style was different," Kekalainen says. "It was maybe a little more aggressive in the old days, intimidation was more part of the game than it is now. I think those things are over now. The European players, as far as the courage and willing to play the physical style is well documented in a lot of players that had great careers. You think of guys like Peter Forsberg; he wasn't only a skill player, he was tough as nails, too."

Finland was always known as the goalie factory, because goalie coaching was ahead of its time. Other countries, including Canada and Russia, have since caught up. However there's still a steady stream of talent in the NHL: The reigning Vezina Trophy winner, Pekka Rinne, is Finnish. But there are young netminders -- such as Nashville Predators teammate, 23-year-old Juuse Saros, and 24-year-old Joonas Korpisalo of the Columbus Blue Jackets -- who many believe are on the verge of breaking out, once given the full-time opportunity.

As for back home in Finland, it's easier than ever to consume the NHL. Barkov remembers growing up that he'd never really watch full games, just highlight shows after school. Now there are channels and streaming options than ever, and the possibility has been floated for more afternoon NHL games to entice European audiences.

"I hope that we don't just have one summit in 2009, and I hope we don't think we should just have it every 20 years," Kekalainen says. "I hope we approach it as a constant process of how can we always get better. I think we need to, as a small nation, always be on the top of the curve as far as being trailblazers and taking advantage of all the new technology and new trends to be ahead of the curve. I don't think we can afford to think, 'things are going great, let's just keep doing what we're doing.' We need to have the frame of mind that we need to keep improving every day."