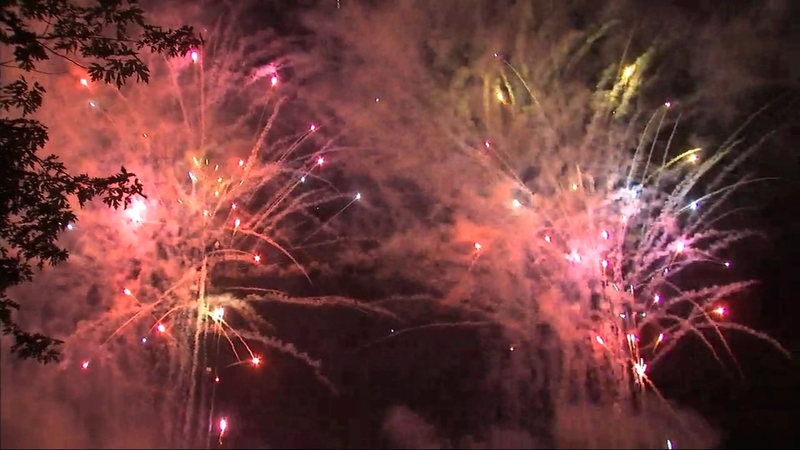 AURORA, Ill. (WLS) -- Fourth of July celebrations are underway across the Chicago area with plenty of parades, fireworks, food and fun.

"We're together a stronger community because of the trials and tribulations we've gone through and today we celebrate not just Aurora, but the independence of our nation," Aurora mayor Richard Irvin said.

This year's celebration stepped off at 10 a.m. near Benton and River and was led by the parade's grand marshals, Aurora's 911 operators. The "headset heroes of public safety" are among the courageous first responders that were acknowledged this year for the parade's theme.

Tara Lafan has been a 911 operator in Aurora for 21 years. She was one of the operators honored for their courageous acts during the February 15 mass shooting at Henry Pratt Company that left five employees dead and five police officers wounded.

"It's very humbling and it's an incredible honor, and I never would have expected anything like this in my career," Lafan said.

"When this incident happened, the amount of love and support and outpouring that came to the center was weeks. It was overwhelming for us and we just have to say thank you for that," said Jacqui Hobday, an Aurora 911 operator.

Aurora resident Joshua Correa said there's a lot of meaning behind the theme of this year's parade.

"There's a lot of Aurora history that comes through the parade, plus independence," Correa said. "We got little ones that we bring up and teach them about what's going on around here."

The celebrations won't end there - Aurora will also host a fireworks display at RiverEdge Park at 9:30 p.m.

Fourth of July celebrations are underway across the Chicago area with plenty of parades, fireworks, food and fun.

Wynn Cramer, the event producer at Melrose Pyrotechnics, said the 2019 Itasca Fireworks Shows is the biggest show he's ever done. The 9,000 shells are in place, wired to the control panels and ready to go.

Itasca Village officials approved a budget of $115, 000 for fireworks this year. That will allow the company to do a show tightly choreographed to music. This show will be similar the one they recently used for a competition in Montreal.

The show has become a signature event for the town of just less than 9,000 people.

"Most people when I say I'm from Itasca they say where is that, by Schaumburg," said Jeff Pruyn, the Itasca Village president.

The fireworks might be the headliner, but a popular musician is expected to join in the festivities. Chicago's Maggie Speaks Band will be joined by the lead singer from Everclear, Art Alexakis, who will sing some of the band's mega-hits from the 90's.

For the musicians, it's a great opportunity to play for a huge crowd in a great setting. As many as 40,000 people crowd onto the lawn every year for the show.

"I love municipal events, I love city events that are free to people. For the 4th of July where they can come out, and they enjoy music, and they enjoy food, and it's very traditional American. I love the feel of it." Alexaskis said.