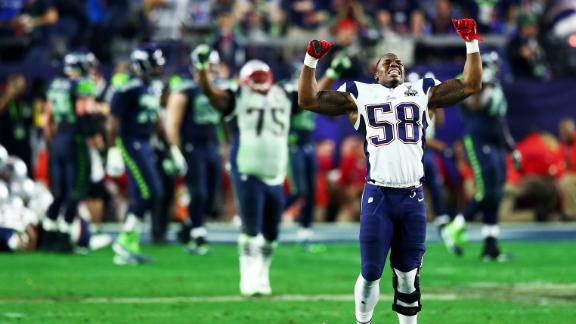 Nevada sportsbooks won $3.2 million off $115.9 million wagered on the Super Bowl, according to numbers released by Nevada Gaming Control on Monday. But it could have been so much more.

The New England Patriots winning in a higher-scoring game than expected was the worst-case scenario for the majority of sportsbooks, and they still posted a profit for the 24th time in the last 26 Super Bowls. The point spread closed at pick 'em at most books with the over/under total 47.5.

The Patriots defeated the Seattle Seahawks 28-24 Sunday, with Malcolm Butler's last-minute interception on the goal line sealing New England's victory and taking a giant chunk out of the books' profits.

MGM Resorts International, Nevada's largest sportsbook operator, said a Seattle touchdown, instead of the interception, would have produced a million-dollar swing in favor of the house. Instead, the book had to rely on winnings from prop and futures bets for its profit.

The books held just 2.8 percent of the money wagered on the Super Bowl, the lowest hold percentage since 2011.

Overall, the betting action on the Super Bowl was balanced at most books. Of 20,000-plus wagers on the point spread at the MGM, only 200 to 300 bets separated the Patriots and Seahawks, assistant manager Jeff Stoneback said. There was 50 percent more money on the Patriots, though, including a $1.22 million bet on New England. That was the only seven-figure bet at the MGM, but there were numerous six-figure bets.

"I'd say 60 percent of them were on the Patriots," Stoneback said.

John Avello, executive director at the Wynn race and sportsbook, also took a million-dollar bet on the Patriots from a "casino guest" Sunday, just a few hours before the game.

"He's a guy who hasn't really bet too much with me in the past," Avello said. "But he said he had a feeling about this game. I guess his feeling was right."

Avello said the goal-line interception also cost his shop seven figures and led to a net loss on the Super Bowl for the Wynn.

The Westgate SuperBook, Wynn, Caesars, William Hill and Stratosphere sportsbooks all said Patriots and the over was the worst-case scenario.

"It would have been huge if it fell [Seattle] 31-28," said Jason Simbal, vice president of risk at Las Vegas sportsbook operator CG Technology.

It was the first Super Bowl ever to have a consensus closing line of pick 'em. New England quarterback Tom Brady threw his fourth touchdown pass of the game with two minutes to play to push the total over.

It all went against the books, yet they still made money, thanks to prop and futures bets. Of course, the standard 10 percent juice or vig off the enormous handle also helped.

Sportsbook operator William Hill said its handle was up 10 percent from last year, when a record $119 million was bet on the Super Bowl statewide.

"I wrote seven figures on the second half," Avello said.

Since Nevada Gaming Control began tracking revenue numbers for the Super Bowl in 1991, the books are up $134.2 million. Their only losses came in 2008, when the New York Giants upset the Patriots, and 1995, when the San Francisco 49ers routed the San Diego Chargers.

Did Pats Win Or Did Seahawks Blow It?
Stephen A. Smith and Skip Bayless debate whether the Seahawks gave the Super Bowl to the Patriots in the final moments or whether New England earned the victory.
Related topics:
sportsespnnew england patriotsprofitbetsnevadanflmoneymalcolm butlerseattle seahawkssportsbookssuper bowl xlixgamblingwager
Copyright © 2020 ESPN Internet Ventures. All rights reserved.
More Videos
From CNN Newsource affiliates
TOP STORIES