Bodies of 2 missing in DuPage River in Shorewood recovered

WLS
By Jessica D'Onofrio
SHOREWOOD, Ill. (WLS) -- The bodies of two people who went into the DuPage River in Shorewood were recovered on Monday, police said.

The victims were identified as Abraham Ramos, 29, of Palatine, and Hannah Tammeling, 22, of Plainfield, according to the Will County Coroner's Office.

The pair died of drowning, according to preliminary findings. Final cause of death is pending a police investigation and toxicology reporters, the coroner's office said.

Troy Fire Protection Fire Chief Andy Doyle said the activity from search boats up and down the river likely "dislodged her from the bottom of the river."

The actual discovery of the woman's body appears to have been made by a couple walking along the shoreline.

Crews searched the DuPage River at Hammel Woods in Shorewood after two people went into the water.

Just before 6 p.m. Sunday, a witness saw the two individuals go into the water at Hammel Woods Forest Preserve and alerted a Will County sheriff's deputy. That deputy saw both the man and the woman being pulled into the dam.

He lost sight of them and then one of the firefighters from the Troy Fire Protection District saw the man and was unable to reach him.

Authorities believe the man went in first. They don't know why or how he got into the water. They believe the woman went in after to save him, near a very dangerous dam.

"The dam over here in Hammel Woods is very dangerous," Doyle said. "It may not look dangerous to a lot of people, but once you get into the dam there is a boil that keeps turning and turning and sucks you back in against the dam and that is where a lot of the danger is, along the dam and within a couple feet of the dam."

Troy Fire Protection Fire Chief Andy Doyle holds press conference on the woman's body that was recovered from the DuPage river on Monday.

The forest preserve in the area is closed. Crews searched a span of 2.5 miles of the DuPage River.

Some people who live in the area spoke about the dangers of the river.

"There's a lot of signs...down river warning people about the current and the undertow," said resident Brad Kanapkiewicz.

"The locals know not to, especially when the river is up," said resident James Webster. "It ain't up that much, a foot, foot-and-a-half, but it's up enough."
Report a correction or typo
Related topics:
shorewoodwater rescue
Copyright © 2020 WLS-TV. All Rights Reserved.
RELATED 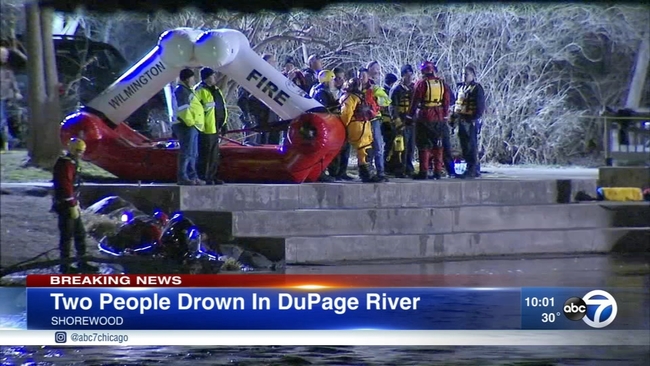