Not only is he smart, he's taking huge gambles, and his father couldn't be prouder.

Holzhauer's father, Juergen, said the Naperville North alum has always had a talent for math and science, which is why he was not surprised when his son made Jeopardy history.

As James Holzhauer read off his final answer in Tuesday's last round of Jeopardy, his family was huddled around a television screen seconds away from cheering loud enough for the entire neighborhood to hear.

"We were cheering wildly," Juergen Holzhauer.

The Naperville native made Jeopardy history with that final bet, breaking the record for single-day cash winnings. Since that moment his father Juergen said the phone has been ringing off the hook

Juergen said the response has been unbelievable, but his son's talents has not. The proud father said ever since James was a little boy, he noticed his son's precocious abilities in math and science.

"We recognized very early that James had exceptional math abilities," he said. "At age four, he was written up in the Trib for his math abilities and in junior high school he was on what they called the Math Counts team."

James later took those talents from Naperville North High School and the University of Illinois to Las Vegas where he works as a professional sports bettor. But if you think James places bets on the table for maximum profit, think again.

"The thing that's really remarkable is that he always places bets that represents somebody's birthday or wedding anniversary," Juergen said.

In Tuesday's game-record win, James took home a total of $110,914 to be exact, an amount that reflected his daughter's birthday

James will be back on the popular game show Wednesday afternoon to secure his spot as the defending champion and his family says hopefully secure a spot Tournament of Champions. 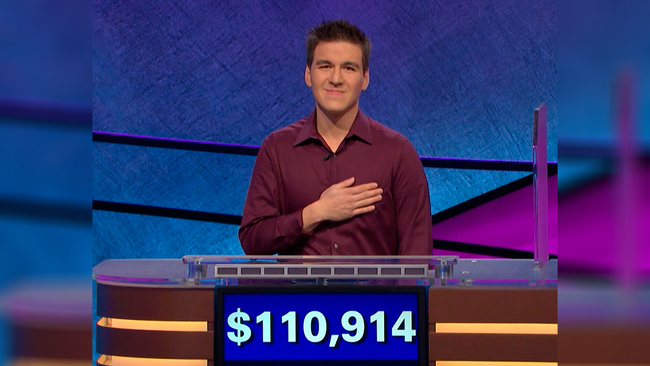