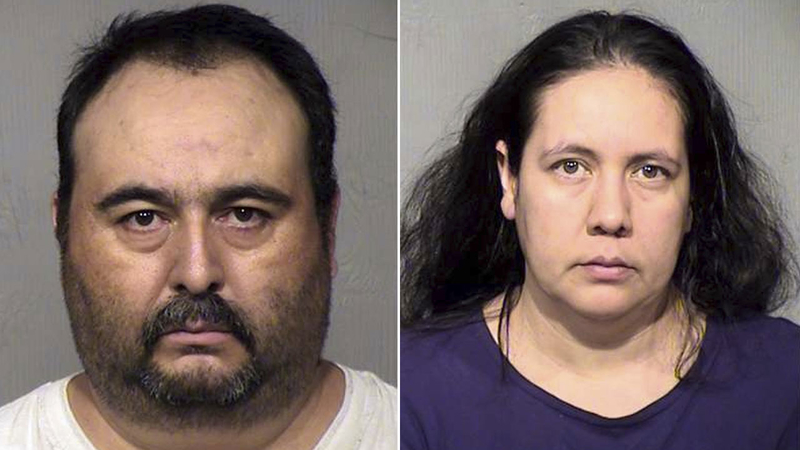 PHOENIX -- A Phoenix couple are accused of forcing a Mexican day laborer into sex at gunpoint and filming another encounter to blackmail him.

Jorge Murrieta, 45, and Brenda Acuna-Aguero, 39, were arrested last week on suspicion of sexual assault, aggravated assault and unlawful recording of a person, according to court documents obtained Wednesday. Murrieta faces additional charges of kidnapping, unlawful distribution of images of nudity and sexual extortion.

The pair approached the victim outside a home improvement store on April 8 about helping them move items in their house, a probable cause statement says. Police say that once they got to the home, Acuna-Aguero told the victim that she had fantasies about having sex with a laborer. They engaged in a consensual encounter, but he didn't know that Murrieta had filmed it through a window from another room.

Authorities said Murrieta then pulled out a rifle and pointed it at the victim's chest. He ordered the victim to have sex with his wife again.

The victim complied. He says the couple then took his visa and Mexico-issued driver's license. They also forced him to show contact information in his phone for his wife, who lives in Mexico. The couple threatened to send her images of the encounter if the victim did not return the next day.

Police say Murrieta dropped the victim back at the home improvement store, then contacted him a short time later. He did not respond and later received a call from his wife, who said she got explicit photos of him with Acuna-Aguero.

Police say the victim then reported the sexual assault. Investigators seized the cellphones of all three and say evidence on them confirms the victim's allegations.

When questioned by police, the couple acknowledged forcing the victim into sex at gunpoint, filming him and making threats with the footage. Murrieta also said they had done the same thing four other times with random men.

A judge last week ordered both held on a $250,000 cash-only bond and attorneys appointed for them. The county public defender's office has not yet assigned them lawyers.