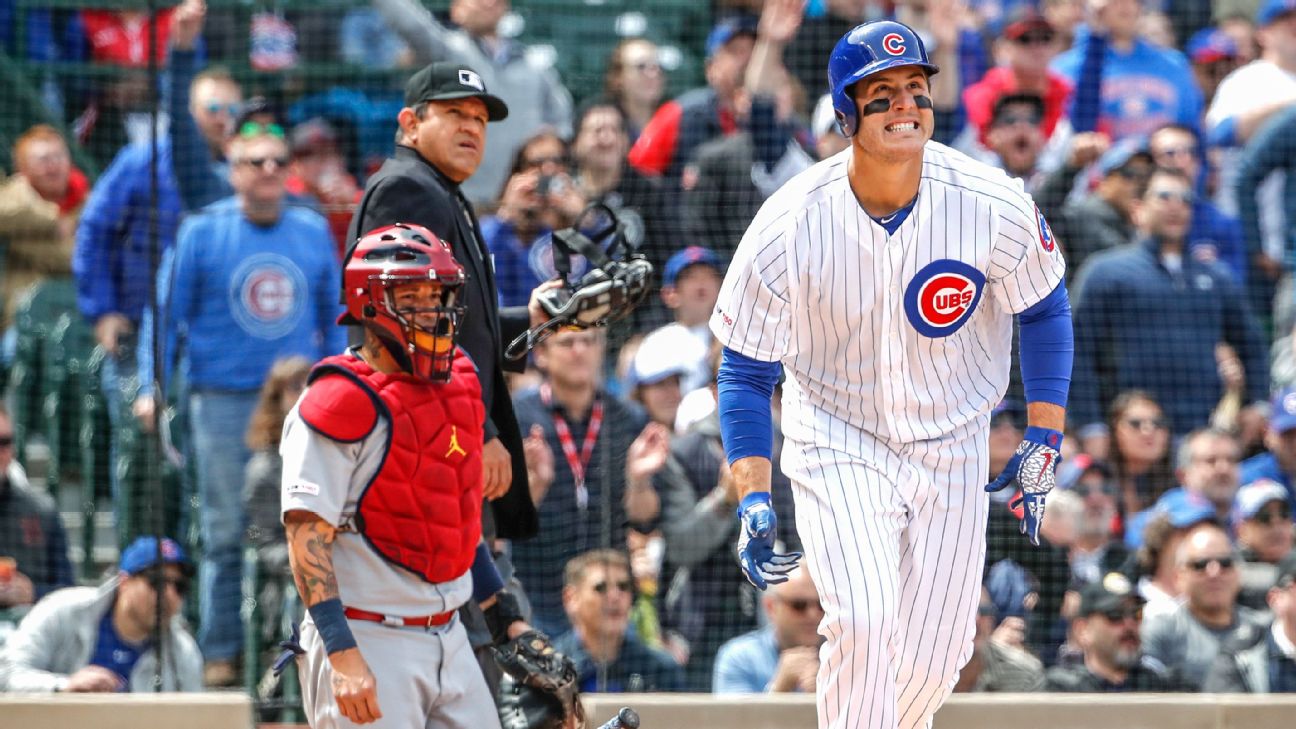 It's a weekend of rivalries old and new -- Cardinals vs. Cubs, Dodgers vs. Padres, Bryce Harper's old team vs. Bryce Harper's new team. Here's your guide to all the fun.

Cardinals-Cubs has long been considered one of baseball's best rivalries. (They play this weekend at Wrigley:Sunday, 7 p.m. ET, ESPN.) But what is the best rivalry in baseball in 2019?

Eddie Matz: If we're talking about the here and now, I'll take Phillies-Nationals. It doesn't have the history of some of the game's more deeply rooted rivalries (how could it, when one of the teams has been in its current home for only a little more than a decade). And Nats fans have a reputation for being about as rabid as a school of goldfish. But that rep seems to have gone out the window -- at least when it comes to Bryce Harper. When the Phils visited D.C. in early April, it was some of the best baseball regular-season theater I've seen in years. I'm not sure if that tension will last throughout the eternity that is Harper's contract, or if it'll even last into next year. But for right now, it's captivating.

Sam Miller: It's probably not the best rivalry, exactly, but I love the Dodgers-Padres rivalry because only one side knows there is a rivalry. To the Dodgers, a trip to San Diego is practically a staycation: Their fans generally outshout the home team's, their team generally outscores the home team, and all in all it feels as meaningful as a trip to Arizona or Colorado. But San Diegans haaaaate the Dodgers, and it's especially aggravating that the Dodgers don't even notice and reciprocate this hatred. The Padres are like a bunch of ghosts trying to haunt a family cabin in the woods, but the family just keeps having a great time, totally unspooked. Anyway, the Dodgers have won 62 percent of their games in Petco this decade, but now the Padres are finally pretty good, and that's fun.

David Schoenfield: At this very moment, we might be looking at Phillies-Mets considering what went down last week between Rhys Hoskins and Jacob Rhame after Rhame threw at Hoskins one night and then Hoskins unloaded a home run off him the following night and proceeded to enjoy the longest home run trot in recent memory. I don't think we've seen the last of the issues between those two clubs. I might also throw out Astros-Red Sox given how those teams met in the playoffs the past two years and the winner went on to win the World Series. Of course, Yankees-Red Sox is still classic, but that's more between the fans these days -- which might also be true of Cardinals-Cubs.

But ... all that pales to the clear and obvious best rivalry: Trevor Bauer versus the Astros. Given the recent Twitter war between Bauer and Alex Bregman, this one has some serious dislike going on. Mark your calendars for July 30-Aug. 1.

The first-place Twins will be in the Bronx this weekend. What is more surprising: The Twins hitting the ball like the '27 Yankees (or the 2018 Yankees, for that matter) or the injury-riddled Yankees racking up wins with a lineup that looks like the 2011 Twins?

Matz: The Yankees are more surprising, for one reason and one reason only. Six of Minnesota's 28 games have come against the Orioles. In those six games, Nelson Cruz has four dingers. As does Max Kepler. As does Eddie Rosario. All together, the Twins have gone yard 23 times in those six contests. In other words, they've hit nearly half of their homers against Longballtimore. Which should come as no surprise to anyone who has been forced to watch the O's this season.

Miller: The Twins are more surprising. The Yankees, besides being deep and having a great team top to bottom, have played a very soft schedule so far -- Baltimore, Detroit, Kansas City, the White Sox, the Giants, the Angels -- and, through Wednesday, are 0-5 against teams over .500 (Houston and Arizona). The 0-5 is interesting, probably not a big deal on its own, but five games against winning teams? At this point in the season? That's wild.

Schoenfield: I guess I'm the tiebreaker ... thing is, Eddie is right! But Sam is also right! I'll go with the Twins because I thought they might crash against the Astros this week, but they beat Justin Verlander 1-0, lost to Gerrit Cole, then won the final two games of the series. Plus, Orioles pitching or not, nobody expected them to be hitting home runs like this. In fact, it seems they'll break the franchise record for home runs, set in 1963 -- the longest-standing such record in the majors.

How important is it for the Nationals to at least hold their own this weekend at Philadelphia?

Matz:It's no more important than them holding their own later this month when they host the Mets. Or when they visit Citi Field the week after that. Or when they go to Milwaukee and L.A. next week. Truth is, I don't even know what holding their own even means as it pertains to the Nationals. Does it mean not getting swept? Does it mean taking taking two of three? Does it mean they do the sweeping? What I do know is that right now the Nationals are not a good baseball team. They look lost without Trea Turner and Anthony Rendon, and that goes for both sides of the ball. It would help if the 2018 version of Juan Soto showed up, but that hasn't happened yet. And that bullpen. Ugh. So yeah, the Nats need to turn things around, and fast. Doesn't matter who the opponent is.

Miller: The thing about a division with four good, evenly matched teams is that you want to say, "Oh, well, it'll be close all year, just gotta stay in it." But that's probably not true. More likely one team will, for reasons we can't anticipate or deduce, jump eight games ahead of where it's projected to be, and one will fall eight games behind where it's supposed to be. And the strength of the division will make it really hard for the team that falls back to claw its way into it again, since every week brings another series against a very good, highly motivated team. At this moment, the top four teams in the National League East are projected, by Baseball Prospectus' PECOTA projections, to win between 81 and 86 games. If the Nationals do get swept this weekend, though, they'll be surprised how quickly the pack has moved on.

Schoenfield: I want to start seeing some good baseball from the Nationals because -- let's face it -- this team has a bit of history of underachieving. At the same time, Turner is still out and now Rendon is out and Max Scherzer and Stephen Strasburg won't pitch in this series and, well, it seems like this is what happens to the Nationals. They win the division when it's weak, like 2017 (the Marlins finished second) and 2016 (the Phillies and Braves were awful), but when faced with a little competition, like last season or 2015, stuff goes wrong. This is starting out as one of those "stuff goes wrong" seasons.

Your turn: What's the one thing you most want to see this weekend?

Matz: Can Zach Eflin go the distance again? Facing the Marlins in his last outing, the Phils righty became the fifth pitcher this season to throw a complete game. If he can repeat the feat on Sunday against Washington, Eflin will become the first hurler to post consecutive CG's since Corey Kluber did it in August 2017. Given how banged up the Nats' lineup is -- Turner, Rendon and Ryan Zimmerman are all on the injured list, and Soto is dealing with back spasms -- the conditions are ripe.

Miller: I'm most looking forward to seeing Casey Mize's second start with Double-A Erie -- his first being a no-hitter that he threw on Monday. Last year's first overall pick appears to be way too good for the minors, and he's putting up minor league numbers that look like those that Roger Clemens and Stephen Strasburg put up. This year, Mize has allowed a single run in 35 innings. The Tigers probably won't bring him up for a while (for shame!), so we're left rooting for farcical stat lines.

Schoenfield: Cardinals at Cubs looks like a fun showdown at Wrigley. Jack Flaherty starts Friday and I'm curious to see if he can get on a roll after throwing seven scoreless innings in his previous start. He's 3-1 in six starts, but with a so-so 4.06 ERA and seven home runs allowed in 31 innings. In fact, despite the great start for the team, the Cardinals' rotation has been giving up a ton of long balls. The Cubs will try to take advantage.

Total home runs in the three Twins-Yankees games at Yankee Stadium: Over or under 12?

Matz: Based on their averages against teams not named the Orioles, these two teams should combine for about seven homers in a three-game series. Under, please.

Miller: Under. Both teams' pitching has been solid, and neither team is the Orioles.

Schoenfield: Four home runs per game? Even with the Little League porch in right field, that's a lot of home runs. I'll go under.

The first-place Dodgers visit upstart San Diego. Will the Padres send a message to L.A. and win the series?

Matz: Absolutely. The message will be something along the lines of: "Dear Dodgers ... We're sorry to inform you that Eric Lauer, Joey Lucchesi andNick Margeviciusaren't as good as Chris Paddack and Matt Strahm. Next time, we'll do a better job of lining up our starting rotation. P.S: Please take it easy on us this weekend."

Miller: More likely going to send them a massage. That's supposed to be a callback to what I said earlier, about how going to Petco is like a Dodgers staycation. In retrospect, there might have been too many metaphors going on in that answer. Anyway, what I'm saying is the Dodgers are still much better than the Padres.

Who's your pick for Sunday night's game -- Cardinals or Cubs?

Matz: Both teams are absolutely rolling right now. But current Cardinals players have a .979 OPS against Jose Quintana. That's more than 300 points higher than what Adam Wainwright has allowed the current Cubs. I'll take The Lou.

Schoenfield: It's a little weird the Cardinals are still depending on Wainwright. After all, the last season he was both healthy and effective was 2014. Since then, he's been worth just 2.4 WAR over 74 starts. His FIP this year is 4.90 -- although he's allowed just three runs his past two starts, on three home runs. My point: Everybody wants Adam Wainwright to be really good again since he has meant so much to the franchise, but I think the Cubs tag him for a couple of long balls and win the game.

Each week, we'll ask our panelists to choose one hitter they think will hit the most home runs and one pitcher they think will record the most strikeouts in the coming weekend. Panelists can pick a player only once for the season. We'll keep a running tally -- and invite you to play along at home. 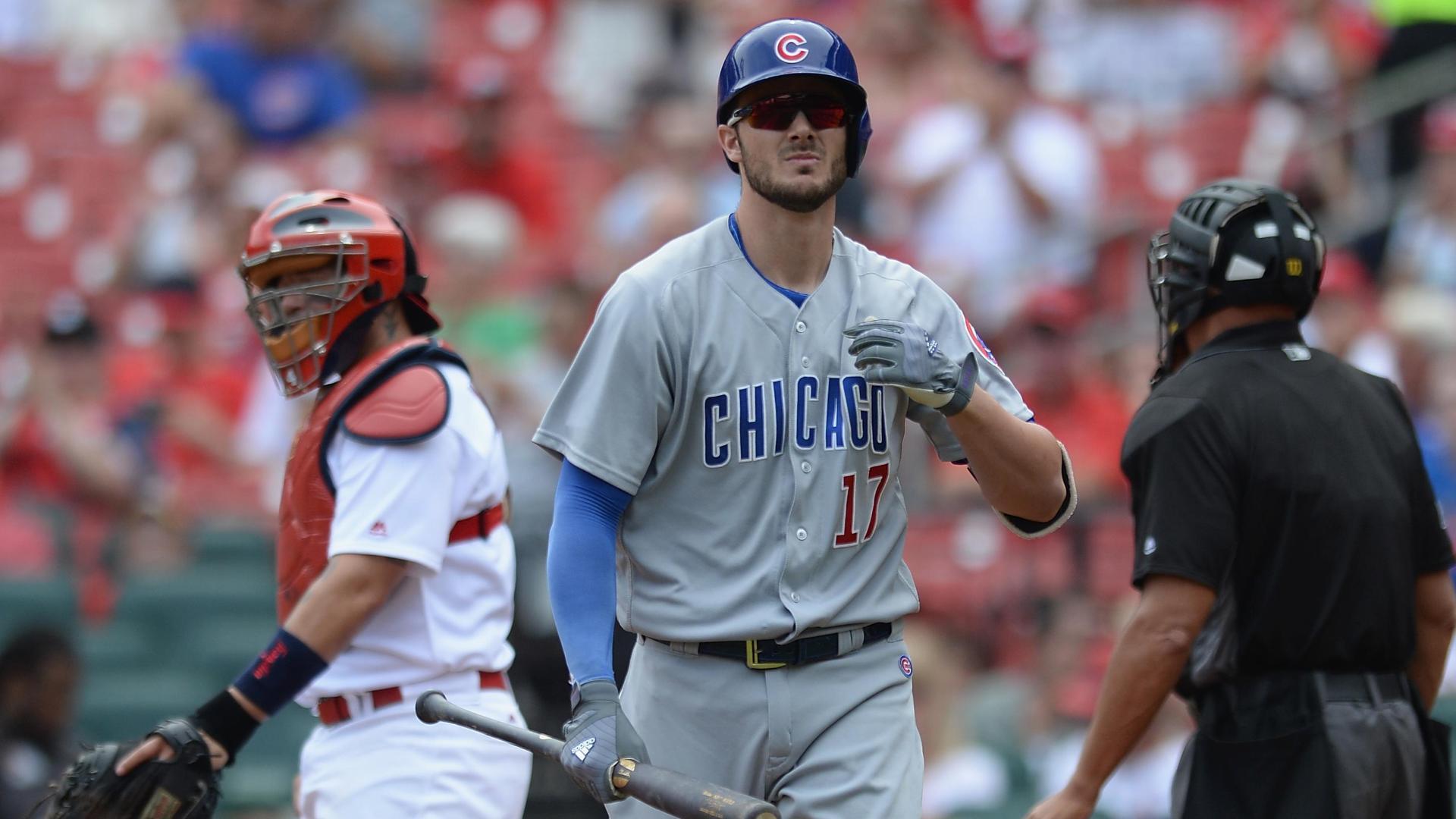