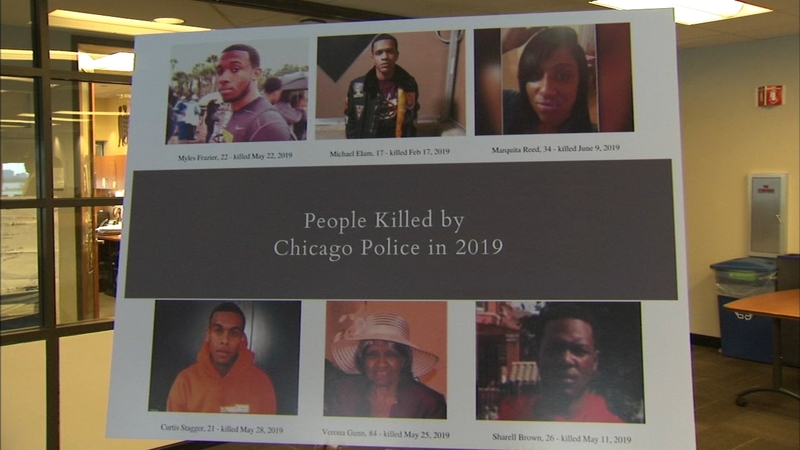 CHICAGO (WLS) -- Community leaders are calling on Mayor Lori Lightfoot to look into recent Chicago police-related deaths. They claim six people have been killed at the hands of officers this year.

Marquita Reed was killed last weekend when police said an off-duty Chicago police officer slammed his car into a South Side restaurant where Reed eating. The 35-year-old mother is the sixth person killed this year in a police-involved death; police say three were shot to death by officers.

An off-duty Chicago police officer has been charged with DUI and reckless homicide after police said he crashed into a South Side restaurant Sunday, killing a woman and injuring an

"Just because we have not been protesting, marching, rallying or shutting things down with physical and visual resistance, it does not mean we have gone away," said Arewa Karen Winters, of Justice for Families.

Several community groups - including the plaintiffs in the class action lawsuit that helped force the consent decree - say that six people killed since a judge signed off on the decree in January is "unacceptable."

"There has been absolute silence by city officials in the wake of these killings and it's been really been business as usual," said Alexa Van Brunt, of the MacArthur Justice Center.

Attorneys are threatening to go back to federal court and hold the city in contempt of the consent decree if the city violates the provisions. Lawyers and activists are demanding more transparency and accountability which the consent decrees require on each police-related death.

"We don't have any evidence in the public view other than what support the officer take on what happened," Van Brunt said.

While the police-involved deaths are being investigated, Mayor Lightfoot said the number of police-involved shootings have gone down. But she acknowledges there is much more work to do.

"We are continuing to work hard to implement the kind of training that is necessary, so we don't put officers in circumstances that use deadly force," Lightfoot said.