Police: Driver of stolen vehicle killed in fiery crash on South Side

WLS
CHICAGO (WLS) -- A man driving a stolen vehicle was killed when he collided with a large car carrier on the city's South Side, police said.

Charlesteen Davis, 75, was clearing snow off her car while it was running when a man jumped inside and drove away. Chicago police say that driver hit several cars before sliding underneath a semi at the intersection of 87th Street and Western Avenue Friday afternoon.

The car burst into flames. Three good Samaritans tried to save him, but he died at the scene. His identity has not been released.

Davis said someone stole the catalytic converter from her last car in the same parking lot.

PHOTOS: 1 dead after collision between car carrier, vehicle in South Side 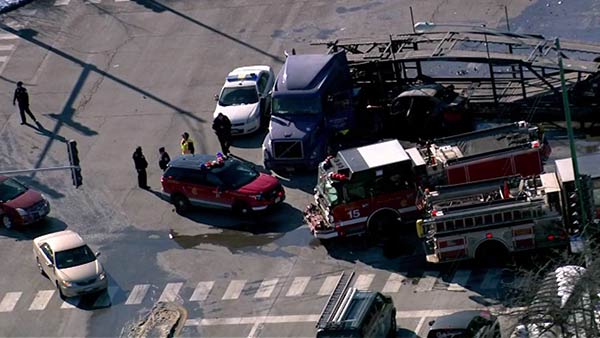 1 dead after collision between car carrier, vehicle in South Side
One person was killed after a crash between a vehicle and a large car carrier in the city's South Side.
Related topics:
greshamcollisioncrash
Copyright © 2020 WLS-TV. All Rights Reserved.
More Videos
From CNN Newsource affiliates
TOP STORIES