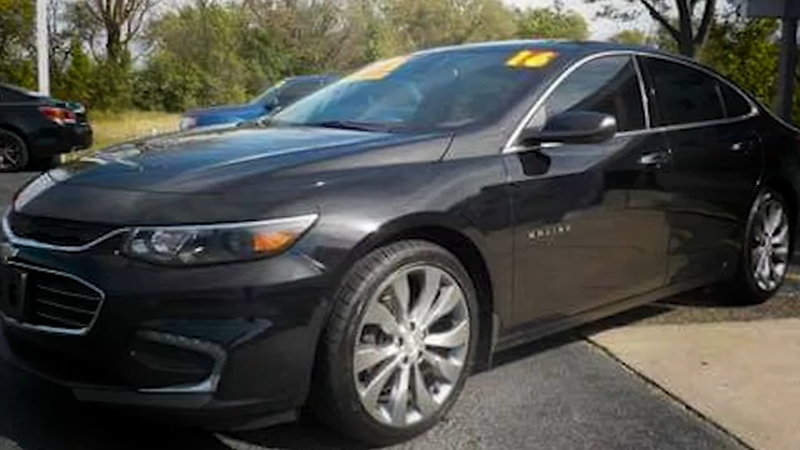 CHICAGO (WLS) -- For several months the I-Team investigated the story of a couple who spent about $24,000 on a vehicle purchased at a south suburban dealership. They lost all of their money and the car when they discovered it was reported stolen. The Illinois Secretary of State's office said they and the dealership are the victims of a title washing ring.

"I was stopped by the Chicago Police Department and they said the car was stolen," explained Richard Wright.

Wright and his fiancee, Michelle Moody, said they were detained for almost eight hours by Chicago police because the Chevy Malibu they had recently purchased was a stolen car. Wright said at first he felt he was treated like a criminal.

When you add in the taxes, fees, and pre-paid insurance extended warranty they purchased, the couple said they paid $24,000. And they bought the car at a licensed dealership.

"It gets a little emotional sometimes because it's a hurtful feeling," said Wright. "There should be better protocols or something implemented so it just doesn't happen."

The I-Team started contacting the Secretary of State's Office in April. Officials there said it was investigating the matter and in contact with the dealership.

In July, the deputy director of the Secretary of State's Department of Police sat down with the I-Team to explain how a consumer can go to a dealership regulated by the state and purchase a stolen car.

"The computers sometimes it doesn't catch it," said Lt. Elmer Garza. "A title won't issue with the Secretary of State's Office if the vehicle is stolen, it will not issue out, our system will not allow that to happen. It was reported being stolen late after the vehicle was reported being offered for sale at the location in Frankfort."

WATCH: How to protect yourself from title washing
EMBED More News Videos

The deputy director of the Illnois Secretary of State Office's Department of Police explains how you can protect yourself from title washing.

Garza added that the Chevy Malibu was initially purchased in 2016 by fraudsters who used fake IDs to get a line of credit to buy the car, then they stopped paying. The bank put a lien on the vehicle and reported it stolen, but those scam artists made a fake "release of lien' document which washed the title and allowed them to sell the car back to another dealership.

"So now they can do whatever they need to do with the vehicle to dispose of it and make a profit," explained Garza.

Garza said eventually the Malibu ended up at Unique Automotive in Frankfort, which was under different ownership when the couple bought the car there. Garza said Unique Automotive did nothing wrong and is also a victim. As an act of good faith, Unique agreed to give Moody and Wright a partial refund of $15,000.

"I did receive a partial payment from the dealership. I am very fortunate for the I-Team and their help and other resources," Moody said.

But the couple is out $9,000 and Garza said this case is prompting a larger investigation into the people who washed that Malibu title. Authorities are calling it a title washing ring. Two people have been identified and Garza said they've done this multiple times. There are warrants out for their arrests.

The Secretary of State's Office said consumers can avoid buying a stolen car from a dealership by going to the National Insurance Crime Bureau database and researching the car to see if it is listed as currently being stolen.

Dealers can also check that website to see if a car has been stolen, but they are not required to.

"At the end of the day, consumers like me end up losing," said Wright.

The Secretary of State's Office said its computer systems does catch 90 percent of this activity to stop stolen vehicles from being sold and purchased from dealerships.