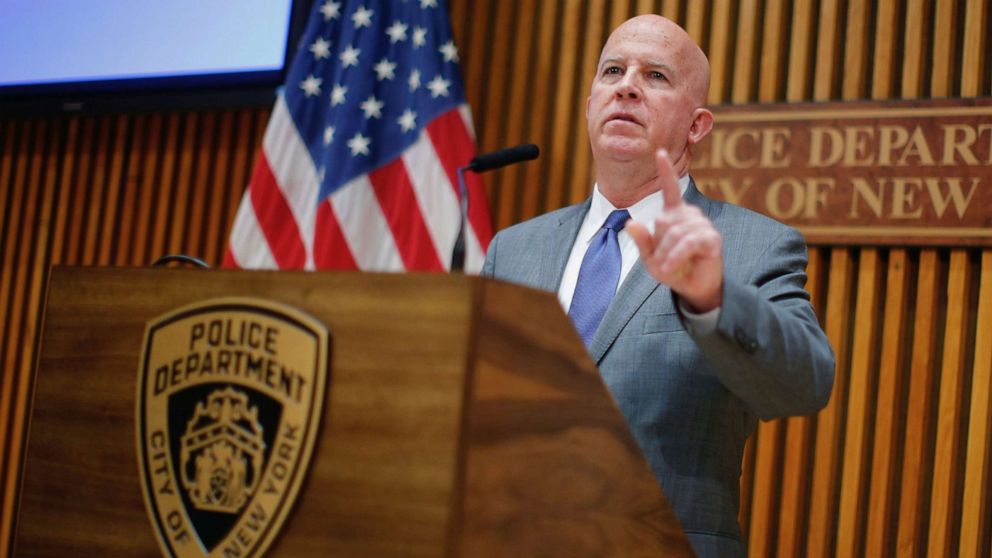 NYPD Commissioner James O'Neill announced Officer Daniel Pantaleo's termination on Monday, calling it "an extremely difficult decision," after a departmental judge earlier this month recommended that Pantaleo be fired for his "reckless" actions during Garner's arrest.

Garner was killed July 17, 2014, when Pantaleo and his partner stopped him for allegedly selling untaxed cigarettes. In the encounter, recorded on video, Pantaleo grabbed Garner from behind and placed him in a chokehold, a maneuver banned by the NYPD in 1993.

"It didn't kill him directly, but it contributed to an asthma attack that the medical examiner's office said did, and that is where the departmental judge and the police commissioner found Officer Pantaleo to be reckless," ABC News Senior Investigative Reporter Aaron Katersky says on "Start Here."

Pantaleo has denied he used the chokehold on Garner. The Police Benevolent Association accused the commissioner of choosing "politics and his own self-interest over the police officers he claims to lead."

Planned Parenthood is withdrawing from the federal Title X family planning program, rejecting millions of dollars in funding for low-income women, instead of complying with new rules enacted by the Trump administration.

Title X, started in 1970, already prohibits the use of funding for abortions, but the new restrictions include that participating clinics aren't allowed to counsel women about where they can receive an abortion, an issue that the federal government has taken different positions on over the years, according to ABC News Legal Analyst Kate Shaw.

"Under the rule that was in effect previously," she says, "providers could give factual, neutral information about the availability of abortions and could refer people who were pregnant and wanted information about it, or wanted to access abortions, to places that provide them."

As Planned Parenthood fought the new rule in court, clinics were supposed to submit "compliance" plans to the Department of Health and Human Services by Monday.

As the gun control debate rages on in the wake of the El Paso, Texas, and Dayton, Ohio, mass shootings, President Donald Trump appears to be softening his stance on new gun legislation.

A few weeks after he told reporters "we have to have very meaningful background checks," on Sunday he seemed to back off any push for tougher gun sale background checks, saying "Congress is going to be reporting back to me with ideas ... but just remember, we already have a lot of background checks."

His shifting position has lawmakers questioning whether they will have enough political support to pass any gun control legislation when they return to Washington after the August recess, according to ABC News' Katherine Faulders.

"I think you see the president genuinely wanting to do something about this, but [he's] being lobbied and pulled by all sorts of different outside forces that it's just unclear what Congress really has an appetite for," she says.

Twitter and Facebook have removed hundreds of fraudulent accounts linked to China that they say were spreading disinformation about pro-democracy protesters in Hong Kong.

The social media platforms accused China of claiming demonstrators were violent, with some posters likening them to cockroaches and members of ISIS.

"There's much, much more activity from the social media platforms going out and hunting for this kind of activity and then taking it down," Ben Nimmo, a digital analyst and director of investigations at the firm Graphika, says on the podcast. "It's really changed the dynamic of what's happening online. You're not just getting troll operations running, but you're actually getting the platforms acting as troll hunters and going out finding them."

Twitter said in a blog post on Monday it would update its policies to reject advertising from state-controlled news media entities. Facebook does not ban ads from state-owned media companies, according to the Associated Press.

'Unfortunate incident': A group of Southern California high school students sparked outrage after a video surfaced of them giving the Nazi salute while a German World War II-era marching song played in the background.

'Look what they did to my head': A Texas family filed a federal lawsuit against their son's school district on Sunday, accusing it of discriminating against the boy by drawing on his scalp with a permanent marker in an effort to bring his haircut up to code.

'I am deeply distressed by today's distorted and malicious account': Sir Elton John is slamming media reports about Meghan, the Duchess of Sussex, and Prince Harry focused on their use of a private jet while on vacation.

From our friends at FiveThirtyEight:

Warren was mentioned in the greatest number of online news stories last week: Of all the 2020 Democratic candidates, Sen. Elizabeth Warren's campaign has stood out for making incremental but relatively steady gains. And along with a rise in her polling numbers, Warren has been getting more media attention.

And for now for something to lift our spirits a bit: Two teachers in El Paso, Texas, who put out a call for people to send postcards to their students after a mass shooting at a local Walmart, have been inundated with more than 1,000 cards -- and counting.

"It has been a very humbling experience to receive such an outpouring of love and kindness from everyone," Teresa Garrett, a fourth grade teacher at Tom Lea Elementary School, told "Good Morning America."

"We're just so blessed and overwhelmed and happy with the response," said Elvira Flores, a fourth grade teacher at Hillside Elementary School. "The students' reactions are priceless."