WLS
By Michelle Gallardo
DOLTON, Ill. (WLS) -- A manhunt is underway after a shootout with police in south suburban Dolton Monday.

Officials said two 19-year-old men entered a used car dealership in the 500-block of East Sibley Boulevard around 1:30 p.m.Monday and robbed the manager of his wallet and gun.

A responding Dolton police officer traded gunfire with the suspects across Sibley Boulevard, dislocating his shoulder as he dove for cover.

Surveillance video shows the officer draw his weapon and soon after, he dives for cover next to his squad car. The officer dislocated his shoulder as he rolled on the pavement. Other officers arrived to tend to him.

"He's doing great... He's at home resting. We went by to check on him last night and several officers were going to stop by this morning," said Chief Ernest Mobley, Dolton Police Department.

The officer shot one of the suspects in the thigh. That suspect was taken to University of Chicago hospital in serious condition.

The second suspect may have initially fled north. Canine units found a black hoodie and ski mask discarded half a mile north of the shooting scene.

Police are investigating to determine if a third suspect was involved.

The officer, a 20-year veteran, suffered a dislocated shoulder and has been released from the hospital.

The car dealership remained closed Tuesday. Illinois State Police are now leading the investigation. The Office of Public Integrity is involved, since one of the suspects was injured by police gunfire. He remains hospitalized as the search for his partner continues.

"We believe he's not from the area so there's no reason to be alarmed, but as always we want our citizens to be vigilant and to be aware of their surroundings," said Mobley.
Report a correction or typo
Related topics:
doltonpolice officer injuredofficer involved shootingmanhuntarmed robbery
Copyright © 2020 WLS-TV. All Rights Reserved.
RELATED 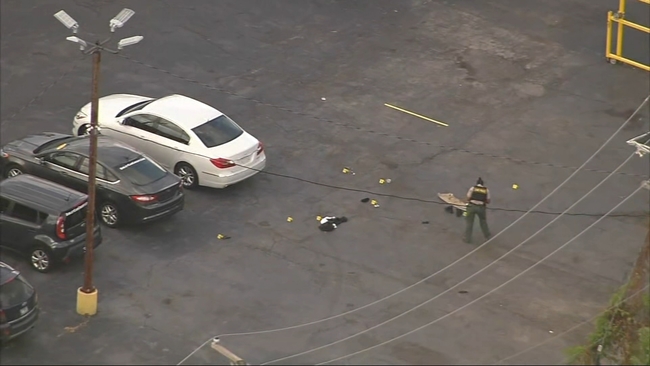