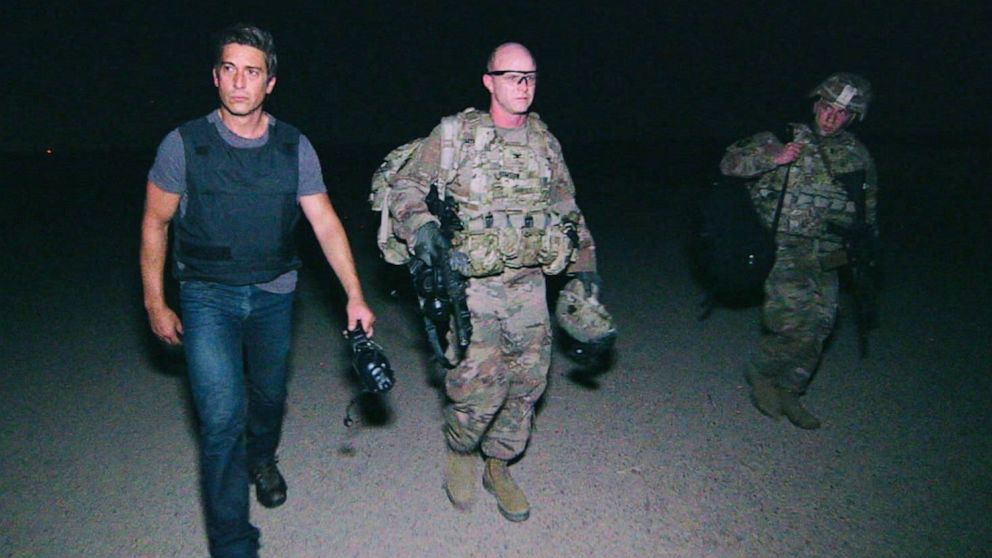 It is a familiar battlefield, but a different enemy for American troops in Iraq.

Mere months after losing their territorial hold across Syria and Iraq -- and after President Donald Trump declared ISIS had been "defeated" -- the reality on the ground paints a still grim picture of recalcitrant ISIS fighters forming an enduring insurgency.

"We have seen, since the collapse of the caliphate, that ISIS has repositioned a lot of its capabilities," U.S. Air Force Maj. Gen. Alex Grynkewich told Muir.

"They're trying to garner resources, extort the population, do low level attacks. There's certainly an insurgency going on, on the ground right now," said Grynkewich, the deputy commander of Operation Inherent Resolve, the joint coalition fighting ISIS on the ground.

Muir traveled deep into the Anbar desert, just 50 miles from the Syrian border, with American and Iraqi forces during an operation to take out ISIS fighters.

Thousands of ISIS fighters, commanders on the ground said, are spread across Iraq and Syria -- sleeper cells hiding in the desert, the caves and blending into populations in town and cities, orchestrating attacks and trying to garner resources.

"In the desert, sometimes, they try to blend in, look like shepherds who are just transiting through the area. In the cities, they try to look like the citizens and the population of Anbar, so that they don't draw attention to themselves, Lt. Col. Ray Stone said.

For months, there have been warnings of a resurgence -- at least two Pentagon reports this year, including one from August, cautioned ISIS was far from eradicated. A report from the lead inspector general for Operation Inherent Resolve, which fights ISIS, warned that from April to June, ISIS "solidified insurgent capabilities in Iraq" and established "resurgent cells" in Syria to "expand its command and control nodes in Iraq."

A partial withdrawal of U.S. forces from Syria further decreased the support available for local forces at a time when they still need training and equipping to respond to ISIS, the report said.

The United Nations went further, saying ISIS leaders are "adapting, consolidating and creating conditions for an eventual resurgence" despite a lack of financing. Those leaders continue to look for ways to "reinvest in the capacity to direct and facilitate complex international attacks," a July report to the U.N. Security Council said.

"(ISIS) has shown a determination to resist and the capability to counter-attack," the report said, adding there is currently a net flow of ISIS fighters from Syria aiming to reinforce an emerging network of ISIS cells in Iraq.

Brig. Gen. William Seely, the American commander of Task Force-Iraq in Baghdad, told Muir ISIS had already started planning its way back to Iraq even before its territorial defeat.

Coalition forces have escalated the number of bombs and missiles used to combat ISIS -- in operations much like the one ABC News witnessed firsthand, where American military train, guide and support Iraqi forces, who move in after airstrikes on ISIS targets.

With coalition support, Iraqi Security Forces attempt to break up ISIS networks, both physical and virtual, in large villages and cities, according to Seely.

In a recent week this summer, American and Iraqi forces took out tunnels and supply depots ISIS used to hide near Mosul, and north of Baghdad.

But the fight is far from over -- both within Iraq and across the border in Syria.

In Syria, American-backed forces hold custody of around 10,000 ISIS fighters. ABC News visited the Alaya prison in the northeastern town of Qamishli. At least 70% of the prison's population are captured ISIS fighters -- some of whom remain unrepentant and committed to the caliphate.

About 2,000 ISIS prisoners held across Syria come from foreign countries, including the United States.

"We've got to get the countries to take ownership of their folks who came here into the battlefield, take them back, and figure out how to bring them to justice," Grynkewich told Muir.

Eight adults and 13 children have been repatriated to the United States from ISIS. Six of those adults are facing several charges, according to ABC News' analysis of indictments and reports of individuals brought back to the U.S.

Both the United Nations and the Department of Defense's inspector general warn holding camps, prisons and rehabilitation centers that house former ISIS fighters, families and supporters have become breeding grounds for radicalization.

"We don't want that to be a spark ... a new wave of committed ISIS fighters," Seely told Muir of the camps. "That ideology still exists, and everything needs to be focused on getting rid of that extremist ideology."

In the sprawling al-Hol camp in northeastern Syria, extremism is mixed with desperation. The camp houses nearly 70,000 women and children who lived under ISIS rule. Some of them are former fighters and many remain staunch supporters.

The August report from the inspector general warned the local forces' inability to provide more than "minimal security" at the camp has allowed the "uncontested conditions to spread of ISIS ideology" there.

Reports of militant ISIS wives and widows burning the tents of those they perceive to be less pious are widespread. Just last month, a video from inside the camp showed an ISIS flag being raised as a crowd celebrated below.

"Children were dancing around the flagpole -- clearly indoctrinated into that ideology there," Grynkewich said. "The physical territory has been taken away from them. But as an ideology, as an organization, they're still very much functioning."