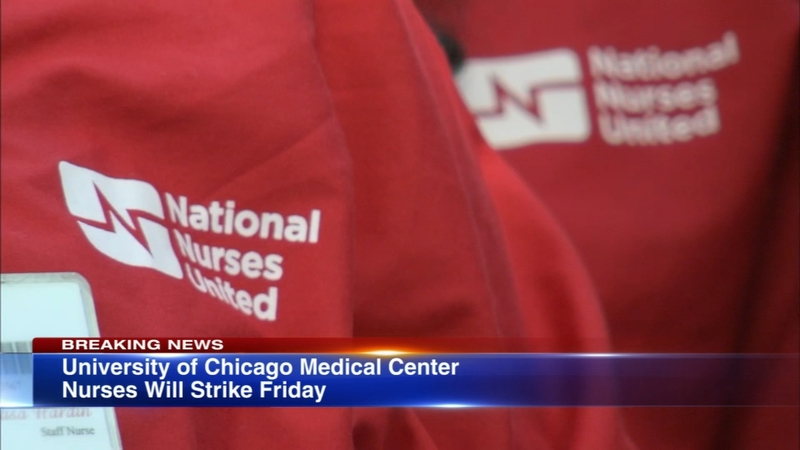 The union made the announcement late Wednesday night after contract talks broke off despite the involvement of a federal mediator.

"The union leaders, frankly, their actions tonight were reckless and irresponsible," said Debbie Albert, chief nursing officer and senior vice president of patient care services at University of Chicago Medical Center. "We were making great progress at the table today. Really, the rules changed as we went and we called off negotiations and here we are with the strike."

About 2,200 nurses will strike Friday. No new contract talks are scheduled before Friday.

University of Chicago Medical Center's contract with the National Nurses Union expired in April. Their main concern is the caregiver workload. In the past year and a half, workers have filed more than 1,700 reports of unsafe conditions to management. The hospital says the complains represent less than one half of one percent of all staffing assignments.

Once notified of the strike, the hospital scaled back operations. Some of the babies and children in the hospital's neonatal and pediatric intensive care units were transferred in anticipation of the strike.

The hospital said that it plans to replace the nurses for five days, per its contract with the agency providing temporary nurses, even though the nurses will strike for just one day.
Report a correction or typo
Related topics:
health & fitnesshyde parkchicagounion contractuniversity of chicagohospitalstrikenurses
Copyright © 2021 WLS-TV. All Rights Reserved.
More Videos
From CNN Newsource affiliates
TOP STORIES