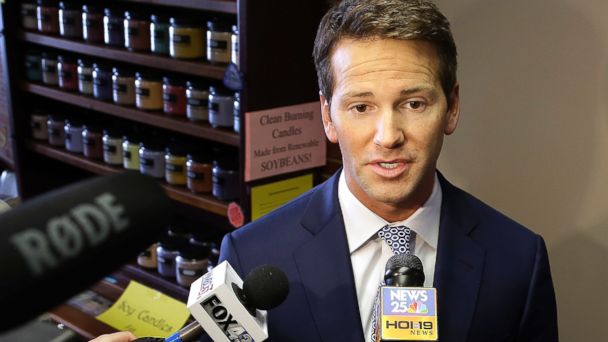 ABCNews
By MIKE LEVINE
The FBI office in Illinois' state capital has opened a criminal investigation aimed at Rep. Aaron Schock, and a federal grand jury will hear testimony in the case as early as next month.

Sources familiar with the federal investigation say subpoenas have been issued to Schock's congressional and campaign staffers, telling them to appear in early April before a federal grand jury in Springfield, Ill. Investigators are specifically looking into the alleged misuse of campaign and taxpayer funds, and they will also be reviewing personal financial dealings with donors, ABC News was told.

Even Schock's father has acknowledged his son's ethics troubles might lead to time behind bars.

"[It] all depends on what the Department of Justice wants to do," Richard Schock told Chicago's ABC affiliate WLS on Wednesday. "Two years from now he will be successful if he's not in jail."

Nevertheless, a decade from now, "whatever he's doing, he will be successful at. I promise you that," Richard Schock insisted.

The congressman's father also said the four-term lawmaker, 33, has been unfairly targeted.

Before any of the drama over decorating his office to resemble the set of the popular show "Downton Abbey," Schock was already under investigation by the House Ethics Committee for allegedly soliciting contributions for an independent expenditure-only political committee in excess of $5,000 per donor, in violation of federal law, House rules and standards of conduct. That investigation will end March 31 with the end of Schock's service in Congress.

The Office of Congressional Ethics was also reportedly beginning its own probe into Schock's expenditures. That probe will also end on the 31st, as OCE doesn't have jurisdiction over former members of Congress.

Schock has repaid all money he's received during his congressional career in the hopes of getting ahead of any potential legal ramifications after allegedly bilking the Treasury out of tens of thousands of dollars by overstating mileage on his official auto trips.

"In an effort to remove any questions and out of an abundance of caution, Congressman Schock has reimbursed all monies received for official mileage since his election to Congress," a Schock aide wrote in an email.

Spokesmen from the FBI and Justice Department declined to comment.