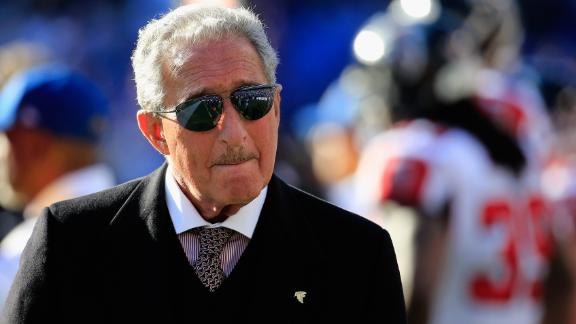 The Atlanta Falcons have been fined $350,000 and will forfeit a 2016 draft pick for piping crowd noise into the Georgia Dome during home games over the last two seasons.

The NFL announced the penalties Monday, saying that the Falcons will lose a fifth-round pick in next year's draft. If the Falcons have multiple picks in the fifth round, they will lose the highest of those selections, according to the NFL.

"What took place was wrong and nowhere near the standards by which we run our business," Falcons owner Arthur Blank said in a statement. "Anytime there are actions that compromise the integrity of the NFL or threaten the culture of our franchise, as this issue did, they will be dealt with swiftly and strongly."

Blank also stated that the Falcons will not appeal the punishment. He acknowledged wrongdoing last month, saying that he found the situation "embarrassing."

The NFL had been investigating the Falcons for piping in the noise while opposing teams were huddling, trying to call their plays. Some around the league have argued that silent counts have rendered crowd noise more irrelevant, and it's difficult to discern how much of an advantage it gave the Falcons.

NFL executive vice president of football operations Troy Vincent said that the Falcons committed the violation "throughout the 2013 season and into the 2014 season until the club was notified last November that the violation had been identified."

"The League conducted a thorough investigation of this matter, and we cooperated fully," Blank said. "We understand the penalties imposed and their impact on our team, and we will not appeal the league's decisions. Further, we have addressed the matter internally and taken actions to ensure that something like this does not happen again.

"The Falcons and all of our other businesses are built upon a foundation of values that drive our decision making. This issue was a clear failure in that regard. I apologize for any embarrassment this situation has caused the NFL, our fans, and our Falcons players and associates."

Vincent revealed that the NFL concluded that Roddy White, the Falcons' former director of marketing -- not the four-time Pro Bowl receiver, was "directly responsible for the violation."

Falcons president Rich McKay was not aware of White's violations, according to the NFL, but will be suspended from the league's competition committee from April 1 through at least June 30 for failing to ensure that the franchise complied with league rules.

The Falcons went 3-4 at the Georgia Dome this season -- they played a "home" game in London -- and were blown out there 34-3 by the Carolina Panthers in Week 17 with the NFC South Division title on the line.

Before Monday's penalty for the Falcons, the New Orleans Saints, who lost picks in 2012 and 2013 as a result of their bounty scandal, were the last NFL team to forfeit a draft pick. According to ESPN Stats & Information, the NFL has now taken away 16 draft picks since 1980.