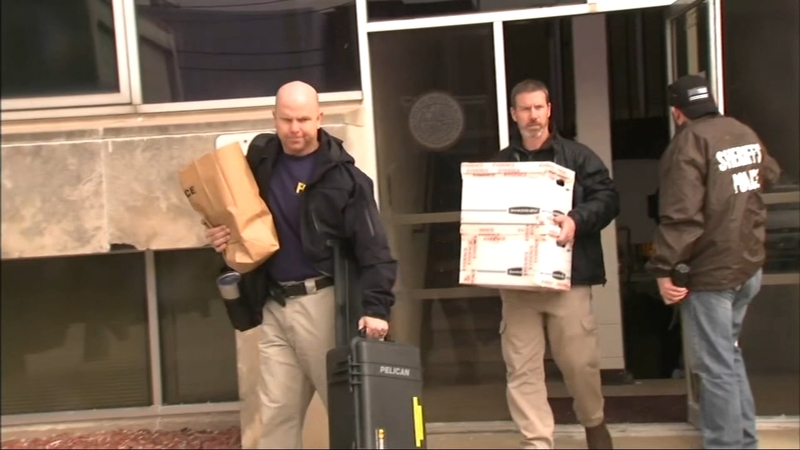 HARVEY, Ill. (WLS) -- Two people related to high-ranking Harvey officials are accused by the feds of shaking down a strip club owner.

A total of six people were charged Wednesday as part of an ongoing federal investigation of alleged corruption in Harvey government, federal officials said.

The FBI executed court-authorized search warrants early Wednesday morning at the Harvey Police Department and City Hall. Boxes of evidence were removed from the buildings.

Cousins Rommell Kellogg, 66, and Corey Johnson, 63, both of Harvey, are accused of threatening to have the city shut down a Harvey strip club if the owner didn't pay.

Johnson was charged with conspiracy to commit extortion and released on a $50,000 unsecured bond. Kellogg did not appear in court.

Prosecutors said the city allowed the club to stay open even while knowing prostitutes operated inside.

Rommell Kellogg is brother of Mayor Eric Kellogg. The mayor is serving his last term in office and cannot run for reelection due to term limits. He released a statement saying he's instructed the Harvey Chief of Police to cooperate with the investigation and has no further comment.

Donald Luster, 55, of Dixmoor, and Will Wiley, 56, of Harvey, are accused of soliciting bribes from a towing company owner.

Luster, the former mayor of Dixmoor, and Wiley were charged with conspiracy to commit felony bribery, which carries a maximum sentence of five years in prison and $250,000 fine. Both were released on $50,000 unsecured bond. They are due back in court on March 27.

The investigations could net more arrests, according to one of the attorneys in court this afternoon.

"There are, in some of those indictments there are lettered individuals who are probably going to be charged in the future," said Donald Clark, who is representing Derrick Moore. "It's the usual way of the United States Attorney to start with people at the bottom and then work upward."