6 killed, 12 others wounded in citywide shootings since Friday afternoon

CHICAGO -- Six people were killed and at least 12 others have been wounded in shootings across Chicago since Friday afternoon.

In the most recent fatal shooting, a 49-year-old man shot within a block of a Green Line stop in the West Side Austin neighborhood. About 6:30 p.m. Sunday, the 49-year-old was in the 300 block of North Central Avenue when he was shot in the chest, Chicago Police said. He was taken to Stroger Hospital in critical condition, where he was pronounced dead, police said. The Cook County Medical Examiner's Office did not immediately confirm the death.

Earlier, on Saturday night, a man was killed and another was grazed by a bullet as they were driving in the Back of the Yards neighborhood on the South Side, according to police. The men, ages 27 and 32, were traveling south in a Chevrolet Equinox at 10:33 p.m. in the 4900 block of South Ashland when two other males got out of a dark-colored SUV and opened fire. The older man suffered multiple gunshot wounds to his body, while the younger man was grazed in the right hand.

Emergency crews responded after the men drove themselves to the 7th District Chicago Police Department at 1438 W. 63rd St., police said. They were both taken to Stroger Hospital, where the older man was pronounced dead and the younger man's condition was stabilized. The Cook County Medical Examiner's Office didn't immediately confirm the death.

A 28-year-old man was fatally shot Saturday evening in the Gresham neighborhood on the South Side. The shooting happened about 5:40 p.m. in the 8200 block of South Elizabeth Street, police said. Brian Dowell Jr. was shot several times and was taken to Christ Medical Center in Oak Lawn, where he was pronounced dead about half an hour later, authorities said. He lived in the same neighborhood where he was shot.

Early Saturday, a 17-year-old boy was gunned down while he drove onto the Eisenhower Expressway on the Near West Side. Jayton Jones, of the Lawndale neighborhood, was driving a Pontiac Grand Prix at 1:19 a.m. in 1700 block of West Van Buren when someone in a black sedan fired shots that struck him multiple times in the body, according to police and the medical examiner's office. The Grand Prix then rolled down the entrance ramp to Interstate 290 and struck a wall. The boy was pronounced dead at the scene.

About 9:30 p.m. Friday, a 39-year-old man was found shot to death in the South Side Hyde Park neighborhood. Jeraun A. McRae was found on a sidewalk in the 5400 block of South Cornell with gunshot wounds to his head, chest and leg, police and the medical examiner's office said. He was taken to Northwestern Memorial Hospital and pronounced dead at 10:06 p.m.

About 5 hours earlier, another man was fatally shot in the West Pullman neighborhood on the Far South Side. Darius Moorman, 21, was sitting in a parked car at 4:27 p.m. in the 12400 block of South Lowe when another male walked up and fired shots, striking him in the chest, authorities said. Moorman then drove off and crashed into several parked cars. He was taken to Christ Medical Center, where he was pronounced dead at 5:26 p.m.

At least 11 other people were wounded in shootings over the weekend.

Last weekend, four people were killed and 16 others were wounded in shootings across Chicago. 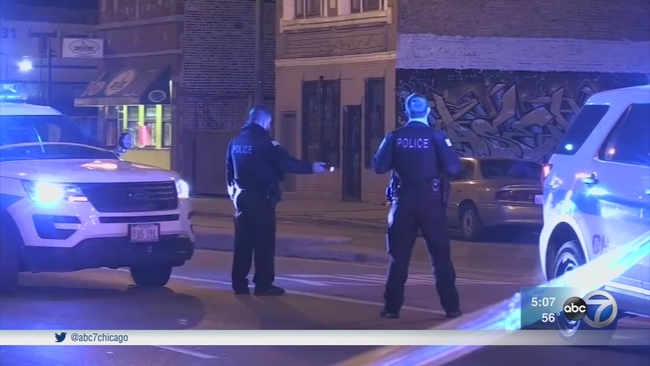