Over the last 11 years, "Modern Family" fans have watched its cast of kids grow up into adults, "all of legal drinking age," as Jimmy Kimmel pointed out during a "Live From His House" segment Tuesday.

"Modern Family" stars Sarah Hyland, Ariel Winter, Nolan Gould and Rico Rodriguez joined Kimmel via video chat to talk about the show's finale, which airs Wednesday at 9 p.m. ET/8 p.m. CT after the documentary "A Modern Farewell," which looks back at the show's creation and run.

The "kids" said they would stay in touch and told Kimmel they cried on the last day of filming.

"I hugged Nolan as he sobbed," Winter said.

"For me, I was kind of keeping it together for the last shot ... and then all of the sudden Ed [O'Neill] put his arm around me, and then I just went zero to 100 real quick. It was just waterworks the rest of the day," Rodriguez added.

The case also participated in a virtual "sibling-rivalry" style scavenger hunt, where Kimmel asked them to find something they love, read texts from "Modern Family's" Julie Bowen and find the largest bottles of alcohol in their homes.

Watch the video in the media player to see the full interview.

"A Modern Farewell" airs tonight at 8|7c followed by the "Modern Family" series finale at 9|8c and "Who Wants To Be a Millionaire" at 10|9c. Meet this formerly homeless LGBTQ activist who's giving back

Jimmy Kimmel to host celebrity round of 'Who Wants to Be a Millionaire?' 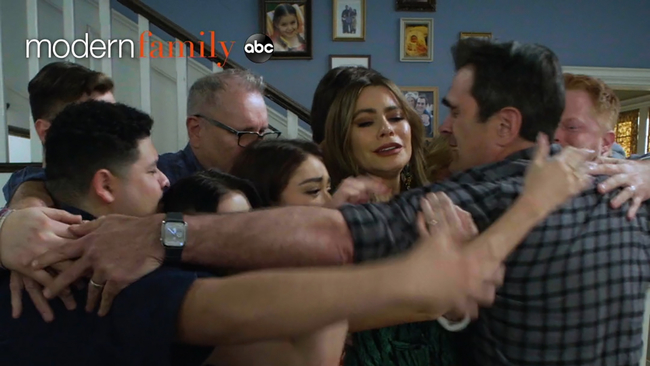