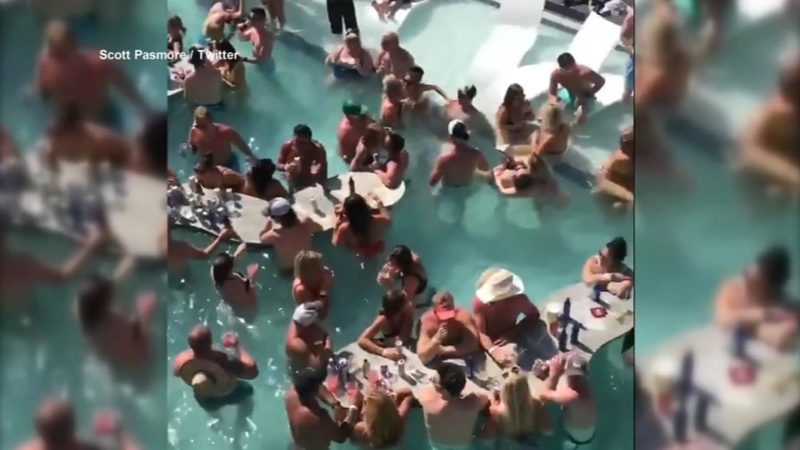 Within the last 24 hours, Illinois performed 28,446 tests, bringing the state's total to more than 2 million.

The Illinois Department of Public Health reported on Sunday that the state's seven-day positivity for cases as a percent of total tests from July 7 -July 13 is 3.0%.

Two of the new reported deaths in Cook County are men in the 20s, part of the age group seeing the highest number of new COVID-19 infections across the nation.

Despite having the second lowest rate for daily coronavirus cases throughout the spring, 18- to 29-year-old have had the highest rate since June 20, which many believe may be linked to the reopening of bars.

Governor JB Pritzker said he's been watching the daily numbers closely and would not hesitate to roll back some reopenings if necessary.

Infections in 18-29-year-olds lagged behind all but children from the beginning of the pandemic until mid-June, about when the state shifted to Phase 4 of the reopening plan, allowing restricted bar and restaurant dining.

Infectious disease specialists say the virus can sit in a cloud with asymptomatic young people.

"They don't have a fever, they don't have a cough, but they are secreting virus and this can happen for several days before they get sick," said Dr. Vishnu Chundi, chairman of the Chicago Medical Society COVID-19 task force. "And so they are infecting all these people around them."

Scientists say in the warm weather, there's still a chance to get the message out to younger adults to take precautions and slow the spread of COVID-19 before the natural uptick expected in the fall.

"I'm very worried about what are we going to do in the fall and winter when we are all indoors and we can't be sitting outdoors on a beautiful day like this," Dr. Chundi said.

The confirmed deaths are:

Illinois reported 707 new COVID-19 cases in the last 24 hours and 25 additional deaths, including two men in their 20s, the age group with the most new COVID-19 infections since mi

Mayor Lori Lightfoot said Tuesday that she has no plans to open the city's beaches any time soon following the slight uptick in cases.

"I'm not confident that we're going to open the beaches any time soon, and here's why: It's not just about being outside, which is in some ways safer, but it's about congregation. We open up the beaches, people are going to flock to the beaches," she explained. "So until we feel like we are in a good place, and right now as I mentioned, we're starting to see a slight uptick in cases, so the beaches conversation is one that's going to have to come down the road."

Some people were in the water Tuesday, which they shouldn't be doing, and Lightfoot said the current high lake levels are a danger in and of themselves.

Police at Ohio Street Beach kept sun worshipers off the sand Tuesday. Officers called beachgoers away from the water.

"It is disappointing but completely understandable seeing what's happening in Florida and other states that are the warm states," said Bernadette Markley.

The Lakefront Trail does remain open as long as people keep it moving.

While the city's top public health official last Friday said there could be some in-person learning this fall, the mayor was much more cautious Tuesday.

"I believe that CPS will be announcing shortly a framework that will be the starting point of a discussion, a discussion that has to involve parents and teachers and other members of the school community, and obviously people speaking on behalf of students to think about what the potential options are," Lightfoot said.

The mayor said a lot can happen in terms of health metrics between now and the start of the school year, which is typically after Labor Day for CPS schools.