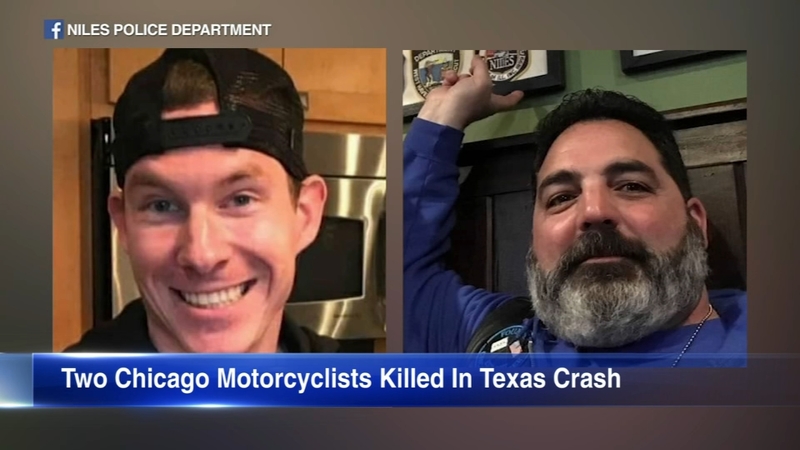 The group was in Bandera, Texas for the annual Thin Blue Line Foundation meeting Saturday afternoon.

"Several of our members had gone on a leisurely motorcycle ride to have lunch in Kerrville this morning before the meeting," David Weed, a spokesman for Thin Blue Line, said in a statement. "They were heading back to Bandera when a car traveling from Medina toward Kerrville crossed over the center line and stuck several of the motorcycles head on. Three of our members were killed in this tragic accident."

Paglia and White were both members of the Chicago chapter of Thin Blue Line Law Enforcement Motorcycle Club.

Paglia served as president of the Chicago chapter and was a retired officer with the Niles City Police Department.

Niles police released a statement about Paglia and White and said Niles Police Sgt. Joseph Lazo was also hurt in the crash.

The statement said a driver allegedly driving under the influence veered into oncoming traffic and struck a large group of motorcyclists. The driver was arrested and charged with intoxicated manslaughter, Niles police officials said.

"These individuals are more than coworkers to our organization - they are family. Our entire department is in mourning at this time," they said.

Paglia was an accomplished police officer, receiving numerous accolades for his bravery while serving Niles. He is survived by his adult son.

White served as secretary of the Chicago chapter and was a Chicago Community Services Officer and retired from the U.S. Army. He emulated all the attributes of a hard working, dedicated individual, Niles police said. He was in the process of fulfilling his life long dream of becoming a police officer. He is survived by his father, who is a lieutenant with the Niles Fire Department.

"To say that Michael was a nice guy is putting it lightly. He would give you the shirt off his back if asked. His smile was contagious," the statement said. "They will both be missed dearly."

Thin Blue Line asked for prayers for the men and their families.