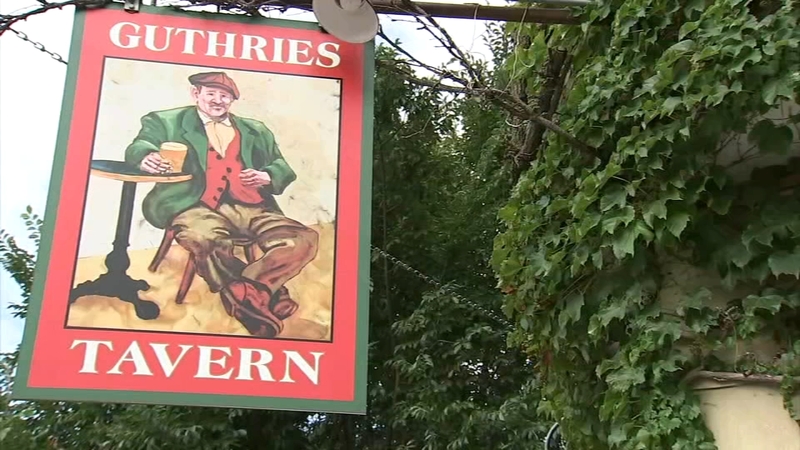 CHICAGO (WLS) -- As Chicago re-imposes COVID-19 restrictions on bars, restaurants and other businesses, Guthrie's Tavern in Lakeview has announced they will close permanently.

The bar announced it will close for good on Thursday after operating for the last 34 years in the 1300-block of West Addison Street.

"With the new restrictions set today for bars and the ongoing COVID restrictions, we don't see a way we can survive," Guthries Tavern wrote in a Facebook post Monday evening.

The corner tavern has a very special meaning to many. Meredith Weber and her husband fell in love there. Ten years later they are hoping to make it back on closing day.

"Actually, I was just walking by and trying to figure out how we were going to do that," Weber said. "We now have a four year old and see if we can make it back for old times and good memories."

Mayor Lightfoot and Chicago public health officials announced Monday restrictions on bars, restaurants, gyms and other businesses will be reimposed amid a recent uptick in cases.

The reinstated restrictions will go into effect at 12:01 a.m. on Friday, July 24, to give businesses time to comply.

-The maximum party size at tables for restaurants and bars has been lowered to six people,

-There is a maximum of 10 people allowed at indoor fitness classes,

-Personal services that require facemasks to be removed, such as shaves or facials, will not be allowed.

-Residential property managers are being asked to limit guest entry to five people per-unit to avoid indoor gatherings and parties.

Bar owners say the last few months have been an emotional roller coaster, and now they're feeling worried once again with the city reimposing certain restrictions.

Health officials say the biggest increase in COVID-19 cases is coming from young people ages 18-29, and many of those cases are related to bars where social distancing and wearing masks is difficult.

For businesses that can stay open, and are working hard to follow the rules, like the Music Box Theatre, they are finally beginning to break even financially, and hope they can keep their doors open for good.

"We just want everyone to be responsible we are doing everything we can but obviously personal responsibility is a big part of this," said Buck LePard, senior operations manager for The Music Box. "Another shutdown would make it really hard for us to continue."

At The Four Treys Tavern in Roscoe Village, two tables on a sidewalk just won't cut it.

"We can only have people out in front, and you better hope that they make enough money there I can pay my bartender that's serving, and I can pay my bills," said Colleen Flood, owner at Four Treys Tavern in Roscoe Village.

Old Crow Smokehouse in River North is a normally popular place for parties and groups - but not in the age of COVID-19.

"I'm not surprised the mayor did this," said Sam Sanchez, the owner of Old Crow Smokehouse who also serves as vice chair of the Illinois Restaurant Association. "I'm just glad she didn't go back to Phase 3."

Because Old Crow serves food, they can also keep the bar open. But K's Dugout in Bowmanville, a decades-old neighborhood fixture, is one of hundreds of city bars that doesn't serve food and will be forced to close their indoor spaces on Friday.

K's Dugout in Bowmanville, a decades-old neighborhood fixture, is one of hundreds of city bars that doesn't serve food and will be forced to close their indoor spaces on Friday.

Manager Cathy Mathis said they've been extremely careful about enforcing capacity limits and keeping people spread apart. But now they feel like they're being hurt because of the actions of other bar owners who are not following the rules.

"It is unsettling," Mathis said. "It was three months with the bar closed, and then we finally reopened with just outside. And now we were allowed to have people inside, and now we're taking a step back."

K's Dugout will still be able to use their patio, but the loss of indoor bar business will hurt.

"We haven't allowed more than 24 indoor since they let people in," Mathis said. "We have the seats all spaced out, so people are kept apart the way they're supposed to be. The ones that are not following the rules are ruining it for the ones who are."

"This is a neighborhood place. It's like a Cheers. Everybody knows your name," patron Gary Phillips said. "Unfortunately, when that happens, it's going to take away business which they can't afford to lose."

The Chicago Department of Public Health said the city has moved back into a high-incidence state after the city has exceeded 200 cases per-day on a seven-day rolling average, with the average being 233 as of Sunday, July 19.

According to Chicago health officials, the biggest increase in COVID-19 cases is coming from young people ages 18-29, and many of those cases are related to bars where social distancing and wearing masks is often difficult.

"We really do make these decisions based on the data," said Dr. Allison Arwady, commissioner of the Chicago Dept. of Public Health. "We set some pretty clear metrics both for when we may need to pull back and when we can move ahead if we are able to get back on a downward trajectory."

City inspectors handed out a dozen citations for COVID-19 violations at bars over the weekend. The Department of Business Affairs and Consumer Protection issued a statement that said: "While most businesses are taking the necessary precautions to keep their customers and employees safe, the City will continue to hold the bad actors accountable."

Illinois Governor JB Pritzker said he supports the effort, too.

"I want to commend local leaders for taking action to keep residents safe and the state stands behind those efforts," Pritzker said.

There will also be restrictions placed on some services at salons that can't be done while wearing a mask, including facials. J. Gordon Designs in Lincoln Park said they are taking extra precautions to keep customers and employees safe.

"Like it or not, we understand the risks of airborne particles without a mask," said Karen Gordon, the owner of J. Gordon who also serves as president of the Chicago Cosmetologists Association. "So we respect what the mayor is doing."
Report a correction or typo
Related topics:
health & fitnesschicagolooplakeviewbarlori lightfootcoronaviruscoronavirus chicagorestaurantscovid 19
Copyright © 2021 WLS-TV. All Rights Reserved.
More Videos
From CNN Newsource affiliates
TOP STORIES