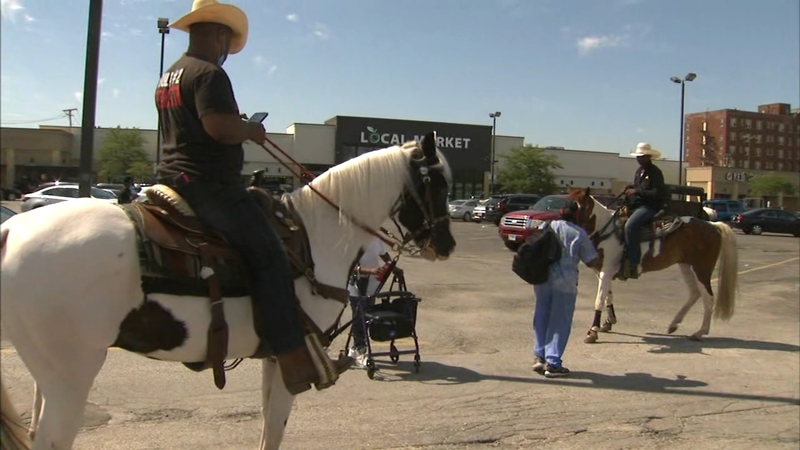 CHICAGO (WLS) -- Chicago's census cowboys are riding into the city's lowest census response rate neighborhoods, trying to the word out about filling out the 2020 Census and being counted.

In South Shore, Joi Levell brought her grand- and great-grandchildren for a free horse ride, but ended up taking part in the 2020 census.


"TYears ago I didn't know how important the census was," she said. "I got educated and did it to help the community."

Levell was just one of dozens encouraged to participate as efforts continued to ensure those in under-served and under-resourced communities are counted for the 2020 census.

Response in the South Shore neighborhood has hovered around 30 percent for weeks.

"Lack of trust," said Sandra Hayes, Census 2020 coordinator. "They don't understand that by providing to the census, there's nothing that can be done with that information."

Advocates say the $1,400 federal officials allot per person during the count really adds up.

"They ask you so many personal questions, how many in your house and all that, but I guess it's worth it," said Elizabeth Phillips, South Shore resident.


Workers said so far participation has been hindered by the COVID-19 pandemic, as well as distrust of the process. That's the reason Murdock the Cowboy and his trusty stable of steeds have taken to the streets.

"Take the stance of being important to your community, to make a way for the community you live in," he said.

The event also gave people the chance to register to vote.

"This is just another way to make our government accountable to us and make it provide the resources that we need in our communities," said 5th Ward Alderman Leslie Hairston.

The deadline for self-response for the 2020 census has been moved up by four weeks to September 30.