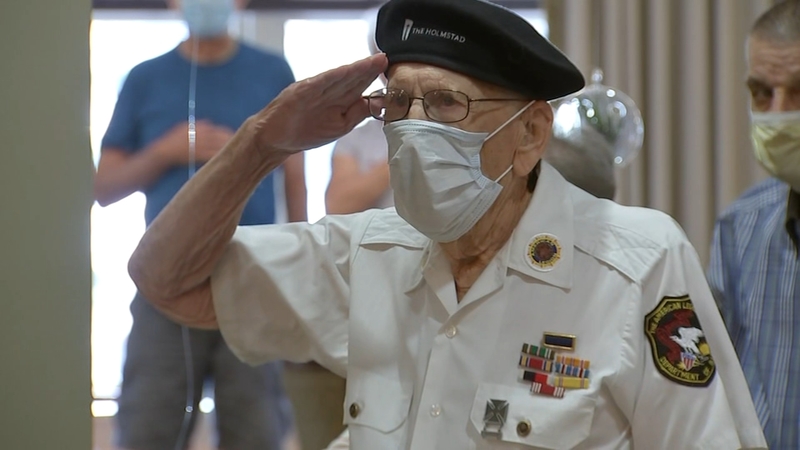 CHICAGO (WLS) -- The day World War II officially ended is forever remembered in the minds of Chicago area veterans, even though it's 75 years later.

On Sept. 2, 1945, the instrument of surrender, the official paperwork that ended the war, was signed on the deck of the U.S.S. Missouri in Tokyo Bay The moment is so sweet, so memorable years later.

"It meant everything in the world," said Robert Larson, a World War II veteran who served in the U.S. Navy. "A heavy burden had been lifted from my life. I knew that my future now was going to be not Navy, but whatever I was going to choose."

Robert Larson was a sailor onboard the U.S.S. Texas, which was sent to battle the Germans at Omaha Beach. The ship traveled along the French coastline during wartime.

Larson said the experience helped later in life when he became a minister, preaching 35 years in Michigan, Illinois, Pennsylvania, and Rhode Island.

"I learned things from serving during the war in the Navy that I could never learn in a seminary," said Larson "That was just added training to help me defend my faith and share my faith with the world."

Larson was among 12 other World War II veterans who were recognized and honored at a special luncheon at the Covenant Living at the Holmstad in Batavia. The veterans dined on shrimp cocktail, braised short rib, and mashed potatoes, which was all topped with apple pie and vanilla gelato.

Bativia's mayor also presented each of them with a certificate to thank them for their service and sacrifice.

Even though there was reason to celebrate, the veterans' humility was ever present. "We had a job to do and we just did it. And hoped we could survive," recalled John Faust, a WWII veteran.

Faust, an Army sergeant, served during the final push to Germany. On the day Japan surrendered, he remembers thinking, 'Well, I'm going home."

Like the Batavia luncheon, ceremonies were held across the country. The official ceremony took place at Pearl Harbor.

In Chicago, WWII veteran Benito Morales was reissued the Bronze star with valor. Retired alderman James Balcer and other veterans attended the event.

All these veterans, sharing their stories, their sacrifice, their commitment to this country.

"It's a great country regardless of all the small problems. I call them small problems that occur from time to time," Faust said. "I enjoy living in this country. I would fight for it today if I had to."

Their words reflect their patriotism and dedication to the United States. It could be a lesson for generations to come.