Chicago police investigating string of break-ins on NW Side 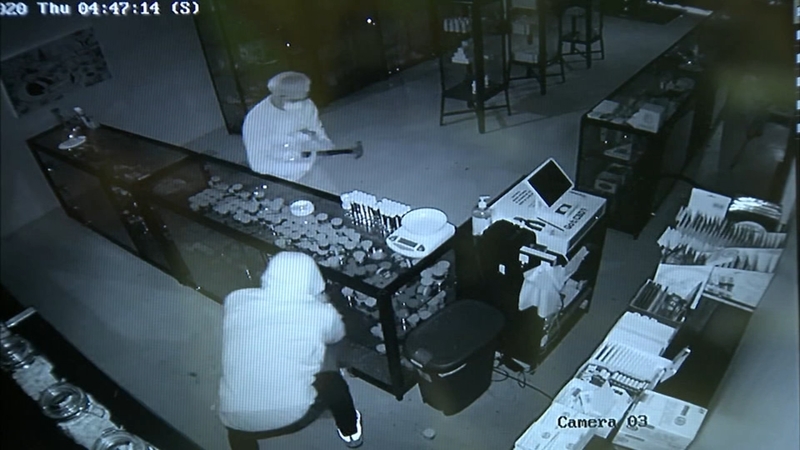 Chicago crime: Police investigating string of break-ins on NW Side, including at marijuana shop, jewelry store

Police said a car rental business in the 5300-block of West Irving Park was broken into, with the front and side windows shattered. Police said it appeared that someone entered the business, but it was not clear if anything was taken.

Workers at a jewelry store in the 7000-block of West Higgins Avenue said they were also broken into Thursday morning. They said the suspects were in a Dodge Caravan and used a hammer to break the window.

Surveillance video shows the suspects attempt to use the hammer to break a display case. After they could not break it, workers said the suspects jumped on top of it.

Meanwhile, a break-in was also reported at a marijuana shop in the 3400-block of North Harlem Avenue at about 4:50 a.m.. Police said two suspects were seen fleeing in a blue minivan.

On surveillance video at Smokepost CBD at Roscoe Harlem avenues, one of the suspects is holding a hammer. The other is clearing out shelves of product into a bag. They jump in a van and take off. They were in the store for less than a minute.

"We see them pull up in the front," said employee Adam Delgado. "Two guys come out and smash the window in. They run and try to grab as much as they can."

Store employees spent the morning sweeping up the glass and doing inventory. This was the first time this store has been hit.

"I think it is awful right now," Delgado said. "Money is really tight because of COVID. All these business are barely making ends meet as it is."

Shortly after the marijuana shop was broken into, another break-in was reported at a tattoo shop in the 5100-block of West Lawrence Avenue. Police said two suspects were seen fleeing in a blue minivan.