'Any other officer would have done the same thing,' Lisle Officer Bill Wise said
WLS
By Jessica D'Onofrio and Alexis McAdams 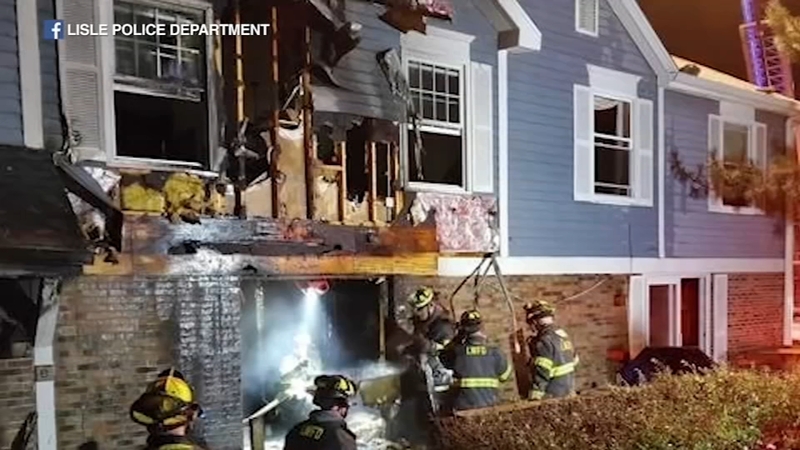 LISLE, Ill. (WLS) -- A 14-year-old boy was rescued from a fire Tuesday at a home in west suburban Lisle.

According to police, around 11:30 p.m. a fire broke out at a multi-unit home in the 2700-block of Wayfairing Avenue and the teen was trapped inside.

Before firefighters arrived Lisle Police Officer Bill Wise was close and the first on scene. Hearing the cries of a boy inside, he jumped into action.

"The next thing I know, he had the little boy in his arms walking over to the ambulance," witness Jennifer Burke said.

When 21-year department veteran Wise arrived he kicked in the front door, but was overcome by flames and smoke.

"It felt like I was punched, and it pushed me back and I inhaled smoke and was coughing," Wise said. "I essentially followed his voice to where the window well was, and that is where I saw his hand and arm sticking out from the cover."

Rushing to the rear of the apartment, he was able to remove an AC unit that blocked a window well. Then he pulled the teenager out of a tiny basement window.

"I saw exactly what's happening and, I mean, that was a very courageous man," witness Evelina Kaunietyte said. "He went in without any protection, and he didn't give a second thought."

Wise took in heavy amounts of smoke but was giving a thumbs up from the hospital.

"I kind of just collapsed from the smoke and the adrenaline rush," Wise said.

The teenager was also treated for smoke inhalation. Both have been released and are OK.

The teenager was the only person inside the unit, according to authorities. The unit owner said the boy lives there with his mother.

Wise was able to speak with the boy after he made it out safely.

"He did a great job staying composed and telling me where he was, and I am just glad that he is OK," Wise said. "I did not think of myself; I just wanted to help that kid as best as I could. Any other officer would have done the same thing."

The fire department said three other units are uninhabitable, but no one else was hurt and a life was saved by an officer who ran in without hesitation.

"Most people don't but that's why we're the police and that's why Bill Wise is a hero," Wilke said.