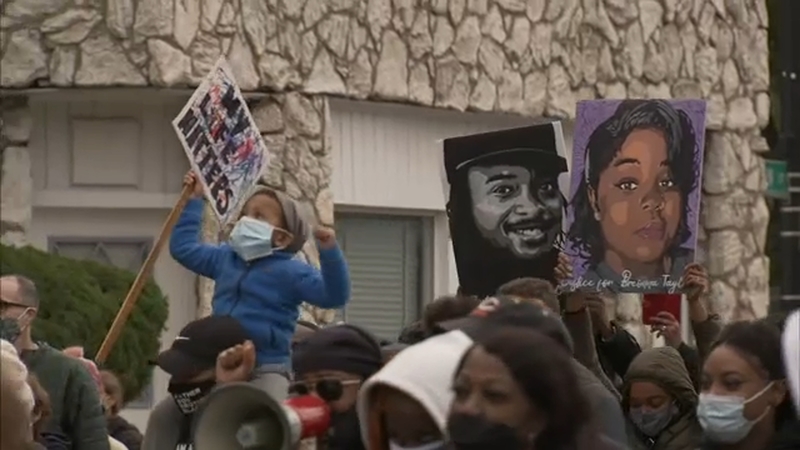 CHICAGO (WLS) -- Dual rallies in the Chicago area not only brought out crowds Saturday but also the families of Jacob Blake and Breonna Taylor in a national cry for criminal justice reform.

"We sick of dying. We sick of fighting," said Bianca Austin, Breonna Taylor's aunt. "We're tired of it. We're sick of being tired."

The families of both Taylor and Blake, united by their pain and their passion for change, joined together in Chicago.

The first event took place at the Rainbow PUSH headquarters.

Civil rights leader Rev. Jesse Jackson stood alongside the families with the support of elected leaders, vowing to get justice.

Rev. Jesse Jackson held a press conference with members of both Jacob Blake's and Breonna Taylor's families Saturday morning urging people to use their voting power and help bring

Both families are also demanding more transparency and changes to the grand jury process.

With exactly a month to the election, they say the best way to help them is to vote. At one point, Austin referenced President Trump's message to the "Proud Boys" during Tuesday's presidential debate.

"Trump told his kind to 'stand back and stand down' and my message for our culture is, you need to stand up and stand tall, and make your voices be heard because the time is now," Austin said.

1 officer indicted in Breonna Taylor case; not for her death (1 of 8)

A Kentucky grand jury declined to indict any police officers for Breonna Taylor's death in March. One was charged with wanton endangerment to firing bullets that struck neighborhin

The Blake family also rallied dozens in Evanston Saturday afternoon while chanting and marching through the streets.

"We must cross the lines that have separated us long enough. Come together and join hands and become a mighty fist," Blake Sr. said. "We can become those fists that change those law that can make those two systems of justice different."

At a rally and march in Kenosha Thursday, activists said instead of feeling discourage by the Breonna Taylor charging decision, they're more energized than ever to get justice for