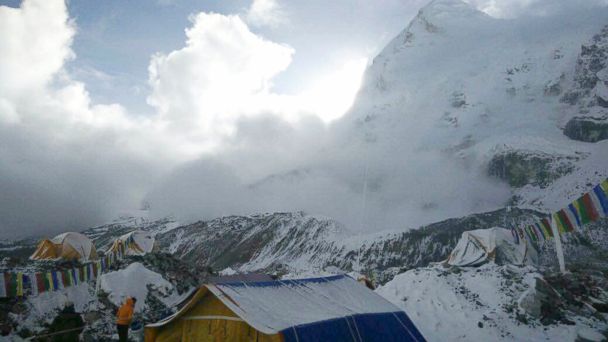 Three Americans were among those killed in the avalanche on Mt. Everest triggered by the massive earthquake that struck Nepal on Saturday.

Seattle-based Madison Mountaineering said on its website that Marisa Eve Girawong was a camp medic who was killed when the avalanche hit the base camp where she was working.

Girawong, a physician's assistant from New Jersey, had attended school in Chicago and focused on trauma and wilderness medicine, Madison Mountaineering said. An avid rock climber and mountaineer, she had reached the summits of Mt. Washington and Mt. Rainier.

"Our hearts go out to the family of Eve Girawong," Madison said. "She is loved by all of us in base camp and a great addition to our team and helped us tremendously. She will be missed greatly."

Google executive Dan Fredinburg was also killed in the avalanche.

Fredinburg worked at Google for eight years, and according to his LinkedIn page, he described his roles as: Head of Privacy for Google[x], Manage Product Management team for Google's Privacy team and Lead Google Adventure Team.

Fredinburg previously dated "One Tree Hill" actress Sophia Bush. In an Instagram post Saturday, Bush described Fredinburg as fearless, funny and "one of the great loves of my life."

The climbing group Jagged Globe wrote on its website, "It is with the greatest sorrow that we report the death of one of our Everest team members, Daniel Fredinburg... Our thoughts and prayers go out to Dan's family and friends whilst we pray too for all those who have lost their lives in one of the greatest tragedies ever to hit this Himalayan nation."

Taplin had been on the mountain for almost four weeks working on his documentary.

The State Department has confirmed three Americans died but has not released their identities.